I'm thankful the minutes of "waiting" really are just a few.

So what did I do this week.

On Monday
A bloke came to take out the huge old shower cubical from the corner of the bedroom. I wasn't best pleased when he said he thought he was "just capping off a shower". "No" I said - "you're removing the whole horrible thing" at which point he looked at his watch pointedly as if to say he hadn't got time. Anyway he got the thing to pieces and out but he couldn't finish the job because he hadn't got any of the bits to seal the drainage pipe properly, or to make safe the electric socket. He did say he didn't mind what work he did but actually he'd been employed to work with the Solar energy part of the company - I found myself apologizing for something that  isn't  my problem!. The guys who work for this company are all OK but the organization is dreadful.

I filled all the holes where the cubical had been fixed to the walls and gave the remaining bit of coloured wall a quick coat of paint. I thought the dull biscuit colour I was covering in the rest of the room was bad enough but behind the shower there was evidence that the walls had once been an even darker sort of cinnamon brown  - very 1970's!

New record for frogs in the mini-pond all at once = 13!

On Tuesday
The friend who was our neighbour in 1980-84, who I visited  a few weeks ago came round for a cuppa.  We caught up more on people we knew from back then, nice to be close enough to meet up after all these years.

After moaning at the company who are doing the plumbing alteration work they sent another young lad round to finish off the work.

In the afternoon I crashed the ride on mower..........and yes, that was as bad as it sounds. Big repair needed. Heavens knows what Colin would have said!  I rang a machinery repair place not far away who advertise in the parish magazine and they came out and collected on Wednesday afternoon. The repair guy will look at it next week and tell me the cost of fixing it.Luckily I had finished all the big areas of grass, so it won't need doing for a week or so.

On Wednesday
Shopping, putting courgettes and peppers in the freezer, cutting the rest of the grass paths and corners with the small mower,trimming all the brambles where they were sticking out from the hedge and probably other things I can't remember.

On Thursday.
Put another  coat of paint over the corner where the shower came out of.
Both granddaughters here for a visit in the morning and for lunch.........brought by their Mums of course! I always love to see the reaction of a baby to a toddler, they are fascinated and vice versa.
In the afternoon I got the third coat of paint in the corner and second coat of paint all round the rest of the room.
So BEFORE I got going with the sander and paint roller 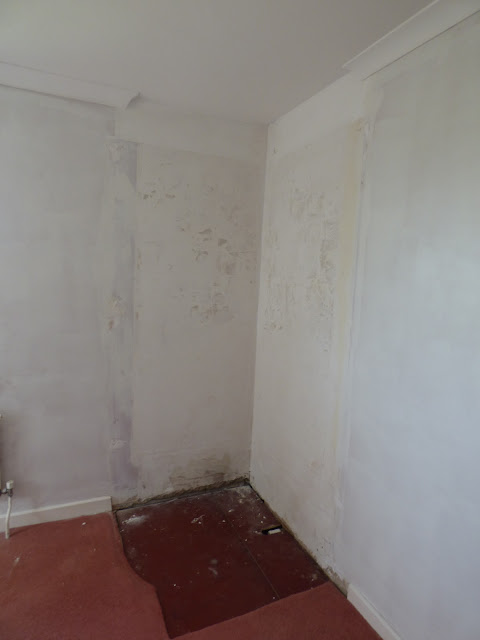 and  AFTER a bit of work 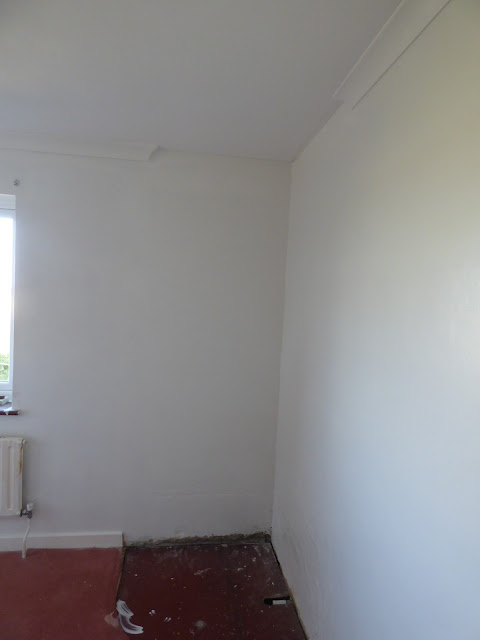 
On Friday
I weeded the cut-flower bed and then went out and  did things that will feature in blog posts next week and the week after.

So apart from a few minutes, the week was good.

Back Monday
Sue
Posted by Sue in Suffolk at 06:00
Email ThisBlogThis!Share to TwitterShare to FacebookShare to Pinterest
Labels: House and Home, My New Normal