Saturday Fails and Successes and Sunday at Home

I shopped in Tesco first on my way into town because they had things I wanted on offer but somewhere between Tesco check-outs and the town my shopping list vanished and at the moment I can't remember a thing without a list, it was a frustrating morning as I forgot where I was supposed to be going in town. So went home without the things that I hadn't got in Tesco and should have got from Asda. Duh! 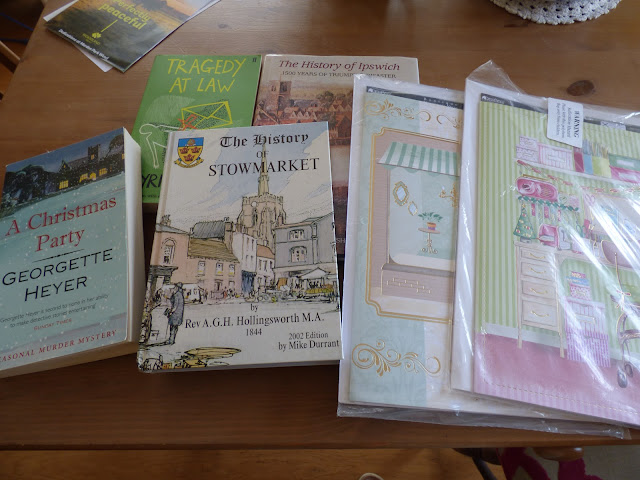 but then forgot to go back to the charity shop that wasn't open when I arrived, the one that is jam-packed full of bits and bobs! Bother.

Got home and found a couple of things that were on offer in Tesco had gone through the till at full price - so annoying and  then remembered what it was that I'd forgotten which wasn't on the list. Bother again

Also found the £1 off voucher I should have handed in for cat food I bought. - Hopeless!

Oh well, it's a new  week  and maybe I'll get myself organised.

The afternoon was better as Son and DIL popped round with Willow, 4 months old next week and such a cutie.
Son came to help me shift the other wardrobe out of the back bedroom, I thought I could do the decorating round it but decided it was too much in the way. They've also carted off a chest of drawers that I'd emptied by jiggling stuff around in other cupboards. They're going to sell it online for me. I'm trying to do a little bit of sorting from the garage or indoors each day, just a few things into a bag for charity shop or into the bin. Saturday it was  the chest of drawers out and  books and  vases went into two carrier bags and out into the car ready for the next time I'm near a charity shop and an ad sent to the Suffolk Smallholders Newsletter for something Col bought and wasn't able to use.
There is so much stuff in the workshop that  needs sorting, I want to get the garage done to make room for the things that need keeping they'll then be moved there from the workshop.

Didn't bother with boot sale on Sunday as it was spitting with rain first thing although we didn't actually have any proper rain until much later. I put a few more plum tomatoes into the freezer - I'm collecting them a few at a time until I've got enough for my favourite Red Hot Relish. Also a couple of peppers added to the freezer bag. Finished sanding down the bedroom walls and ceiling. Sundays tidying was finding £20 worth of books to go off to Ziffit and a couple of bits of old junk from the garage into the bin.

*When I opened them I found the curious craft packs are  3D decoupage sheets for making Huge A4 greetings cards. 2 for Christmas and 2 others. Bit big for posting!.
** I'm pleased with the books as The History of Stowmarket is a facsimile re-print of a very old book from the C19 full of fascinating information. We had a re-bound copy of the original when I worked in Stowmarket Library, but it wasn't allowed out of the library. I've never seen The History of Ipswich book so that will be interesting to look at. The crime novel by Cyril Hare is a reprint from the 1950s and co-incidentally I have just read one of the two of his books I have from the library. I'm not sure what the Georgette Heyer Christmas mystery will be like, it was originally published in 1941.

Posted by Sue in Suffolk at 06:00
Email ThisBlogThis!Share to TwitterShare to FacebookShare to Pinterest
Labels: Charity Shop Finds, Grandchildren, My Books