Eye was once an important town in this area of Suffolk close to the Norfolk border. It had a registry office and was the name of the parliamentary constituency up until the 1980's. It is still a town that serves the surrounding rural are but I found the last bank is closing next month so that won't help the businesses at all. (It's the nearest place to home for a Chinese take-away!)

The church is one of the largest I've visited so far on my tour of Suffolk Churches.
Very difficult to get anywhere to take a photo of the whole church from the churchyard and as usual my photos always make the tower look as if it is leaning! The tower is the reason for this church featuring in the 100 Treasures in Suffolk Churches book. It is a landmark  100 feet tall and was built around 1450. 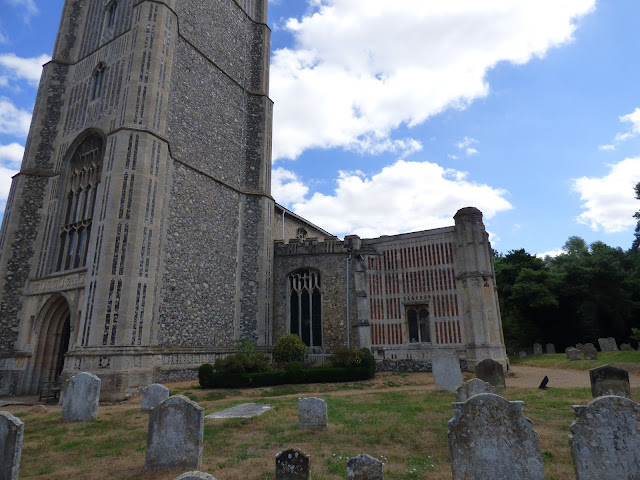 The South porch on the right of the photo above isn't used as a way into the church but now used as a shop! It's been running for 25 years and is the  first shop-in-a-church I've  seen in Suffolk. It sells Traidcraft and  Fair Trade items and second hand bits, bobs and books. The shop is open from 10am until 1pm on 3 days and looks a good place to call in and look round.


The church is a very wide church, difficult to get everything into a photo. It was extended and refurbished  in the 1800's when churches set about restoring their Catholic roots. 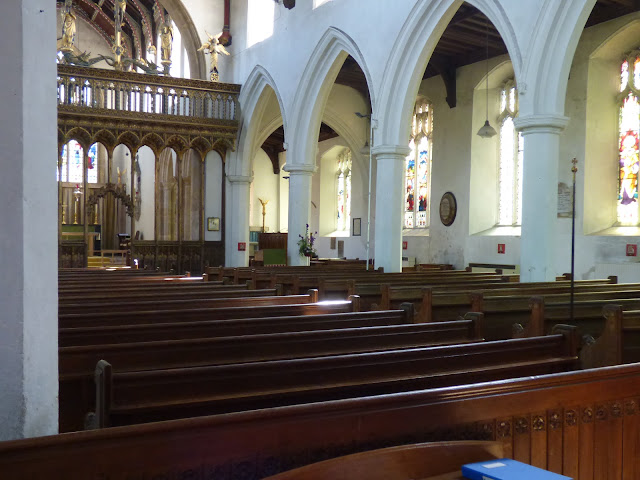 The shrine of Our Lady, set in a tomb recess, dates from 1973 and was carved by Lough Pendred 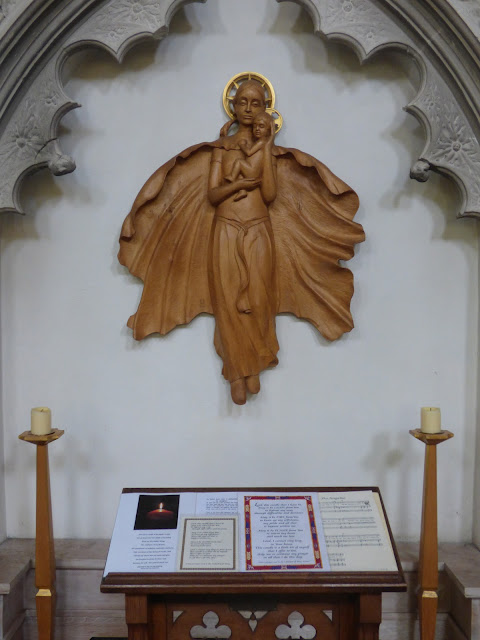 The alter has 6 tall candles which according to the Suffolk Churches website is unusual and a mark of Anglo-Catholic tradition. 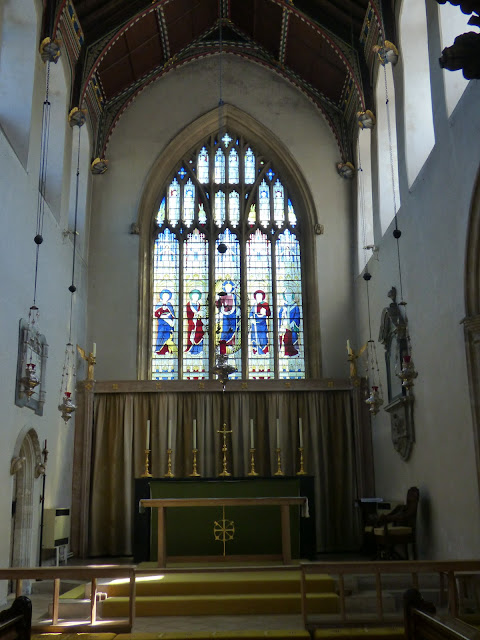 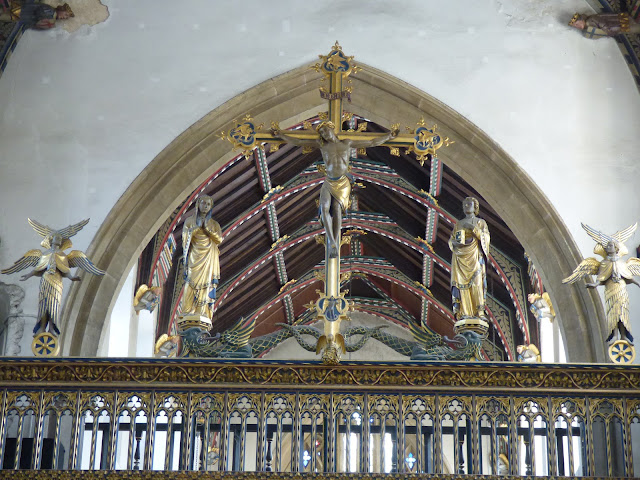 Parts of the roof are painted. Perhaps it was all painted in the distant past. 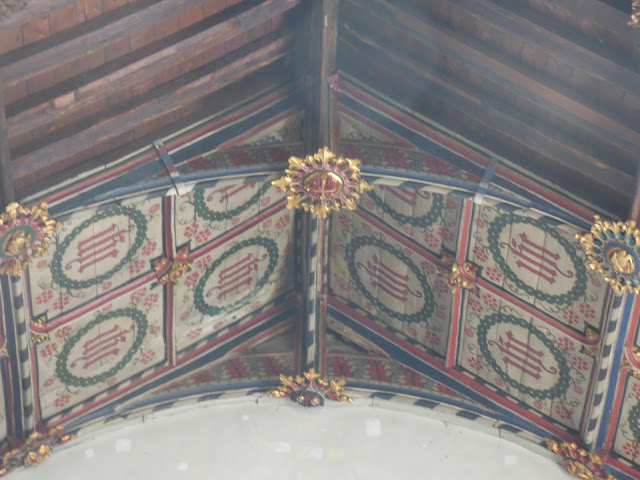 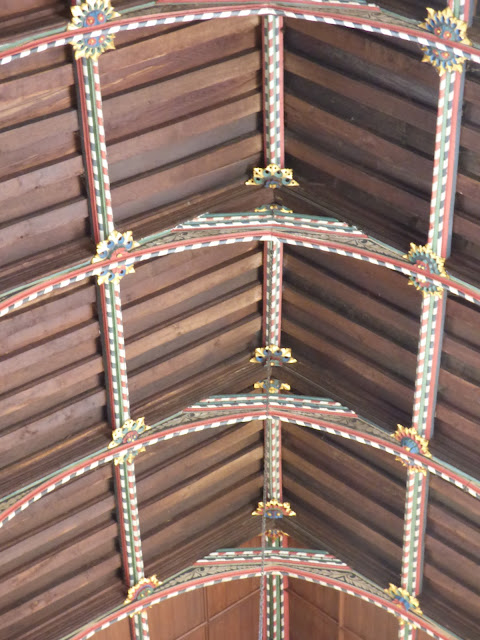 Among the interesting things to look at are the plaques that mark the Stations of the Cross, a series of images depicting Christ on the day of his crucifixion. These were often used for pilgrims to process around during Lent stopping for prayers at each station.  I just took a photo of one. 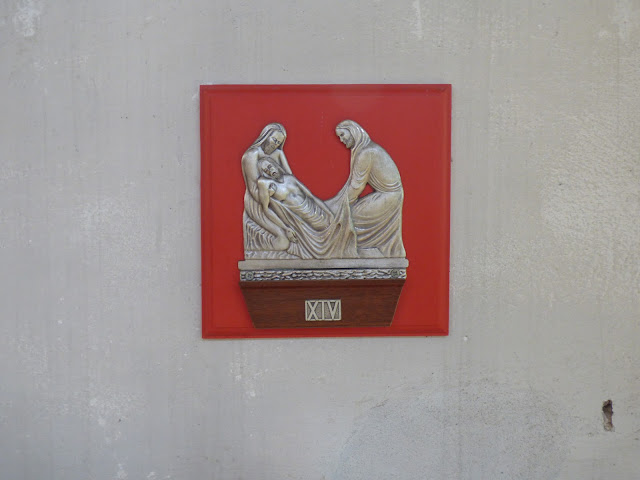 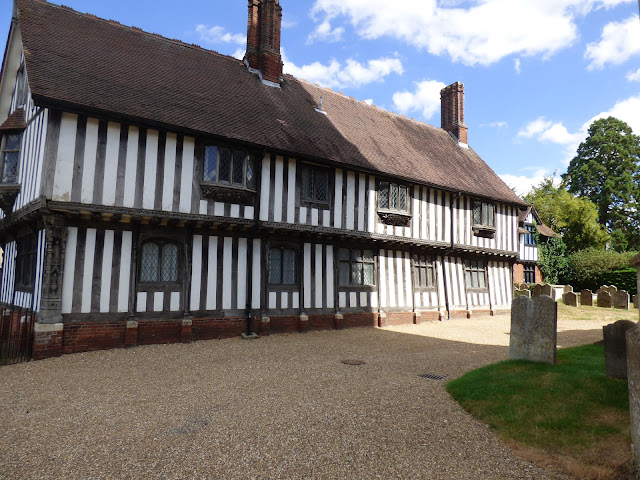 Lots more about the church HERE

Thank you for comments yesterday


Back Tomorrow
Sue
Posted by Sue in Suffolk at 06:00
Email ThisBlogThis!Share to TwitterShare to FacebookShare to Pinterest
Labels: Suffolk Churches