Lammas and August Days and more about Ickworth House

Lammas, the 1st of August was one of the Celts 'cross quarter' days. The dates that fall between the solstices and equinoxes that were used to mark the agricultural year. Lammas or Loaf-Mass marks the wheat harvest. In early Christian  days a loaf of bread made from the new crop would be brought to church to be blessed.
It was an important day in the country, as land which had been harvested could be made available for village people to graze their animals. It was once a public holiday when fairs were held.
For the Anglo Saxons August was Weodmonath - The month of weeds - a prompt to keep hoeing.

August brings the sheaves of corn,
Then the harvest home is borne.

Two pages of August illustration from The Illustrated Country Year by Celia Lewis (btw I still have no idea who sent me her other book The Coastal Year, ) 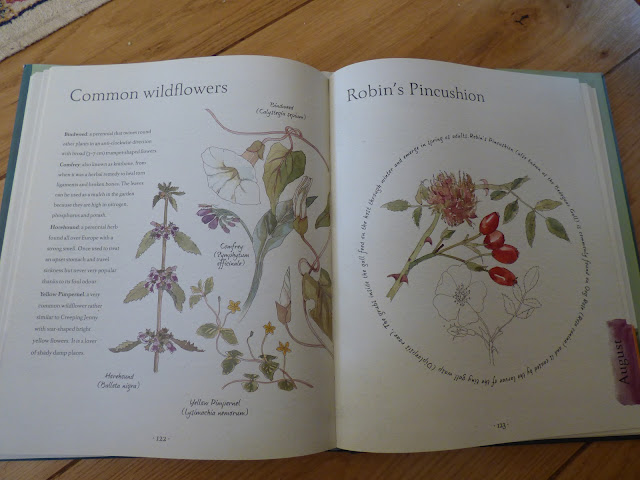 August 24th is Saint Bartholomew's Day, he was the patron saint of bee keepers and it was traditional for the honey to be taken from the bees on this day.
In London a St Bartholomew's Day fair was held to raise funds for St Bartholomew's hospital, the fair was first held in 1133 but was banned in 1855 because of offences against public dignity and morals!
The first "toffee apples" were traditional at this fair, they were windfall apples, skewered on sticks and dipped in honey.

That is a reference to the fact that the forty days from St Swithin's are up on St Bartholomew's.

Maybe we should be prepared because

If the first week of August is unusually warm
The winter will be white and long.

I will go back to Ickworth as we didn't look around the furnished rooms "above stairs" at all because in the first room we went into Jacob spotted a rope round the very old carpet and furniture and before we could grab him,  said "I can go under!" so he did and the NT volunteer lady watching over the room said  "You will have to get him out of there" so after daughter had grabbed him by the leg and hauled him out we beat a hasty retreat outside!

In Reply to Margaret and others................... I've been a  member of the NT a few times in the past and have visited many of the properties in Suffolk and Norfolk, Devon, Cornwall and the Lake District. But I hadn't been to Ickworth and haven't been to some places just over the border in Essex, so with those and the cost of Ickworth and a £15 NT voucher to use for Christmas presents I shall get my money's worth.
To Col. ..........We used to get many people coming to the campsite who had never visited Suffolk before and they were always surprised by the wide open skies, the quiet country roads and the number and variety of things to see. So if you do visit I hope you will enjoy your stay.
Mary.........Jacob liked the playground!
To Katie......I hope you get your country cottage so you can display your copper pans.
To Jackie at Winters End............It was the Hervey family who owned it for 500 years, some had money and then in the 20th century as Rachel said in comments the family had "problems" and handed it to the NT with a 99 year lease to live in the East Wing but then gave that to the NT too to avoid forfeiture because of the 7th Earls  behavior. The East wing is now a posh hotel and the west wing earns it's keep as a conference centre and wedding venue as well as being open to visitors.
To Aril...............I was pleasantly surprised to find I will be able to visit Ickworth again in the winter as last time we were members they seemed to have most houses shut through winter and then only open on odd days in spring

More about the family who owned Ickworth
The entry about them in Wikiwotsit explains the recent family history.................
The 6th Marquess of Bristol married three times. His son from his first marriage succeeded as 7th Marquess A flamboyant character, he died childless and virtually penniless after decades of drug abuse at the age of 44 in January 1999. The 6th Marquess's only child from his second marriage, Lord Nicholas Hervey, died by his own hand at the age of 36 in 1998. From his third marriage, the 6th Marquess had three children: Frederick Hervey, 8th Marquess of Bristol, Lady Victoria Hervey and Lady Isabella Hervey. While the present Lord Bristol is involved in business, his two sisters are reality TV actresses and socialites whose lives feature in the popular press.

How the other half live!!


Back Tomorrow
Sue
Posted by Sue in Suffolk at 06:00
Email ThisBlogThis!Share to TwitterShare to FacebookShare to Pinterest
Labels: Folklore, Lammas, National Trust Properties.