A Children's Book Plus Other Books Read.

I know someone must have mentioned this on a blog otherwise I wouldn't have ordered a children's book from the library but it was the perfect  book to read over Remembrance weekend. Hilary Mckay is an award winning children's author and wrote this new book to commemorate the centenary of the ending of the Great War 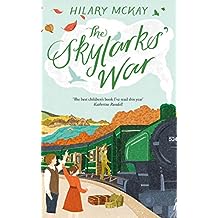 I would have to say this is for older children as it takes the families in the story through schooldays, the horrors of the Great War and onto marriage.

The story starts in 1902 when  baby Clary is born, sadly her mother dies just a while later, she has an older brother Peter  and they grow up in a house with their very remote father. He doesn't like children at all, and has nothing to do with them. Clary always believes it is her fault that her mother died and her Father doesn't care for them.
Each Summer they are sent to Cornwall to stay with their paternal grandparents and their older cousin Rupert who lives with the grandparents when he isn't at boarding school ( his parents having gone off to India without him years before).
Luckily both Clary and Peter are intelligent and manage to work their way through schools until it's time for Peter to be sent off to boarding school with Rupert.
While Clary works hard to try and get to University, some of their friends are out in France fighting and when one vanishes many things change at home.

The other books I've read this month are all crime fiction

Anne Perry- Triple Jeopardy. Historical Crime Fiction. This second book in a series featuring Daniel Pitt, a young lawyer. (the son of Thomas Pitt about whom Anne Perry previously wrote a long series of crime novels) These books are set in the Edwardian era, as the country looms towards the Great War. A Brilliant story well written as always.

Marsali Taylor  - Death in Shetland Waters. Crime Fiction A new to me author which I went for because of the title - being set in Shetland like Ann Cleeves books. I didn't realise this was the 6th in a series but it was a really good story. The action all revolves round the crew of a Tall Ship sailing from Norway to Dublin with trainees on board and a stowaway. Really enjoyed this, it had me reading even more quickly than normal.

Chris Nickson -  The Hanging Psalm. Historical Crime Fiction. This author has written several different crime series set in different periods of history. This is first of a new series. In Leeds of 1820 thief-taker Simon Westow is hired to find a kidnapped daughter but the real answers to this crime come from his own past. Fast paced story showing the darker side of Leeds.

I was really looking forward to reading The Salt Path but as it starts with a diagnoses of terminal illness I was a bit put off. I will get back to it.

Library van due next week and  I've still got several un-read, but there might not be many to collect so that's OK


Posted by Sue in Suffolk at 06:00
Email ThisBlogThis!Share to TwitterShare to FacebookShare to Pinterest
Labels: Book Reviews