I did my first session of volunteering in a brand new charity shop and ended up coming home with a pack of swimming nappy pants for whichever grandchild they'll fit. A  hat to replace one I lost somewhere, a nice big shopping bag and a book called " Year Round Things to Do". Which is a new version of an old book I had when I ran the Cub Scouts. It's full of ideas for crafts and other bits and bobs for children to do each month. 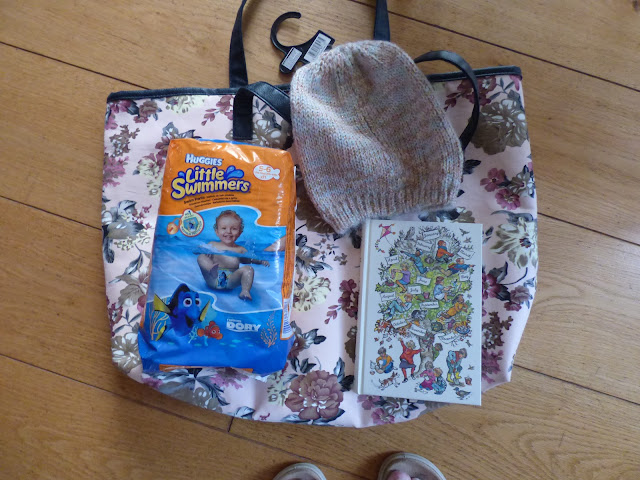 The charity is called Home Start and after they lost County Council funding the local group opened a small charity shop in Eye earlier this year and now this new shop which is slap bang in the middle of Stowmarket.
I had volunteered to make some sense out of their books which had more-or-less just been shoved on the  shelves any old how. I found I hadn't forgot how to quickly get the fiction in alphabetical order and the non-fiction into subjects, despite not working  in libraries since 1980. I made a list of what labels they needed for the shelf edges too.
At the moment the store and stock rooms are in one-heck of a muddle, people are bringing in stuff by the bagful every day and there are nowhere enough volunteers yet. The one paid lady-in-charge is only supposed to do 30 hours but in the first two weeks she's done 50 hours each week! I was there for 4 hours and the shop was amazingly busy. I'm not sure about learning to work the till yet so I'll be back room for the time being.
Stowmarket already had 8 charity shops, this one makes 9 and there's a shop being fitted out as we speak for an RSPCA charity shop - is there enough STUFF in the houses of Stow for 10 charity shops? By the look of it - yes. There have been moans about the number of charity shops in the past but it's better than them standing empty and now there are no small shops empty in the town centre at all.

Posted by Sue in Suffolk at 06:00
Email ThisBlogThis!Share to TwitterShare to FacebookShare to Pinterest
Labels: Charity Shop Finds, Volunteering