It was a fine and bright Saturday morning so might as well go to the big boot sale, after all it might be wet and horrible on the next 3 Saturdays and then there won't be any until February.
Good thing I did as I found some useful things 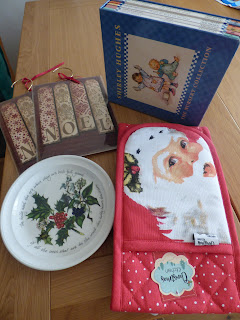 No one was prepared to do any bartering - too close to Christmas-  so I had to pay what they asked. The Portmeirion Holly and Ivy plate was £2.50 and new Christmas oven gloves were £2 as was the boxed collection of the Shirley Hughes books. The packs that say NOEL are sachets of fragrances for hanging in a wardrobe I guess.......they were 50p each. All except the plate will be presents....... the plate is for me - it's my 3rd bit of Holly and Ivy ware, all secondhand - 2  from car boot sales and one from a charity shop. I also bought some Lindt chocolate Teddy Bears from the man who does discount food and it was seeing them that gave me an idea. Something son said jokingly last Christmas "still hoping for a hamper". ( If you read this M or R....... FORGET you've read it straight away!).

Leaving the boot sale I could either turn right and go and "do" another church and visit 2 charity shops in Needham Market or turn left and go back to the A14 and into Stowmarket.
But because of the idea that I'd had  it had to be turn left  for Stowmarket to get some more dried cranberries.

As I walked into town I noticed there was a big Charities fair on at the URC church so popped into have a look and on a book stall found this. It rang a bell - think it was mentioned in a bibliography of something I read a while ago. Paperbacks were just 20p so that was bought. 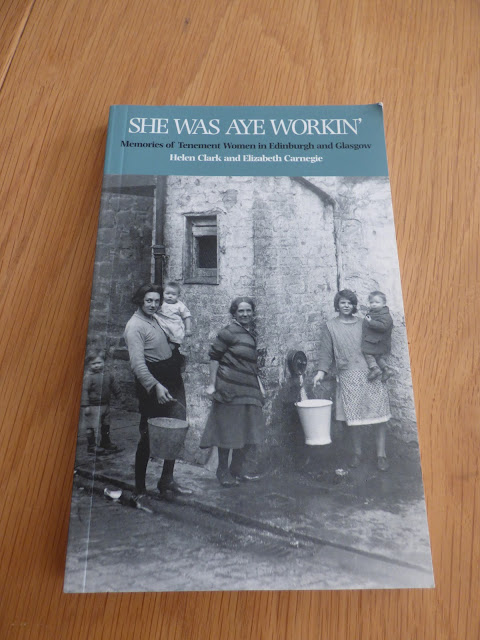 Another Charity had tables full of jigsaw puzzles - dozens of them .....had another brainwave - one could be a Christmas present to me from Col's brother. He doesn't go anywhere to buy secondhand and I would never bother with new jigsaws. I started buying a present for me from him a few years ago - he reckons it's a brilliant idea. I give him the present to wrap and he gives me the money!
Couldn't decide which puzzle to buy so bought two!

Posted by Sue in Suffolk at 06:00
Email ThisBlogThis!Share to TwitterShare to FacebookShare to Pinterest
Labels: Car Boot Bargains, Portmeirion Holly and Ivy Ware