The Cathedral is in Bury St Edmunds and of course gets a mention in the 100 Treasures in 100 Churches book.
A couple of weeks ago I drove west to look round the town where I worked  way back in the 1970's .
Many years since I'd been in the Cathedral but I happened to pick a day when it was full of primary school choirs practicing to sing at a concert, which meant it wasn't possible to get right around the inside.
But here's what I saw.
The Treasure mentioned in the book is this sculpture of King Edmund by Elizabeth Frink and commissioned in 1974. 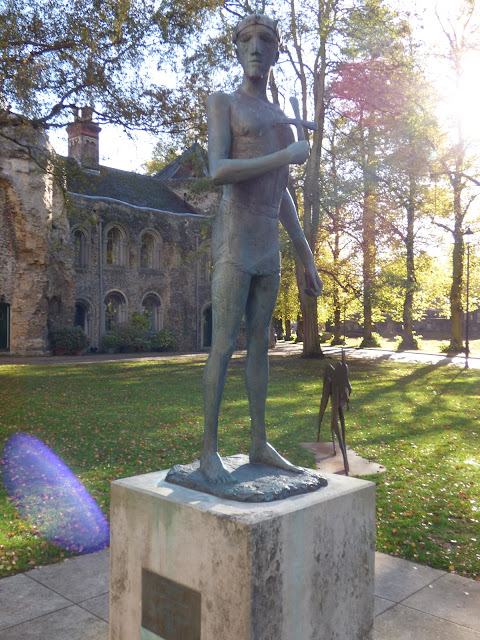 The Cathedral complete with proper tower taken from the Abbey gardens, the top section of the tower was only added to mark the millenium in 2000. It took several years work to finish something started many years earlier. 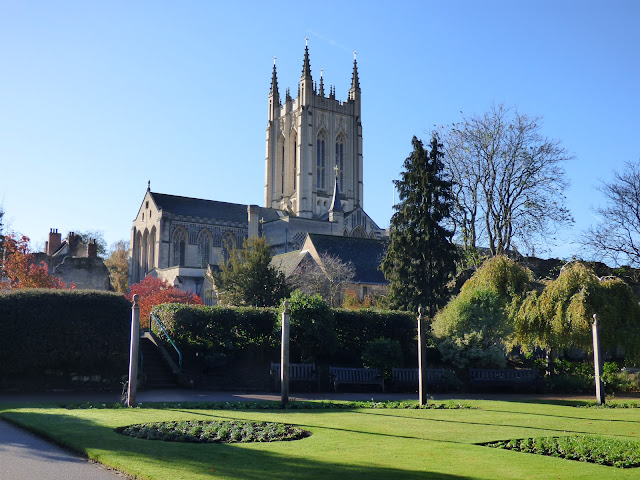 The font with tall font cover 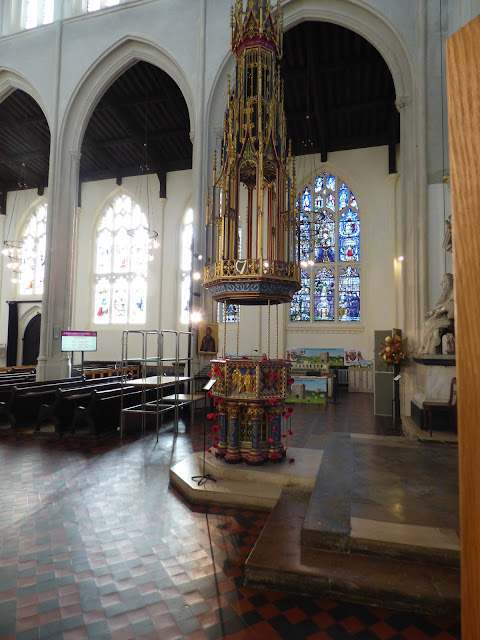 Couldn't get down the front of the cathedral due to the school children.
Note the perspex figures - put in place for Remembrance Day -  The figures were put in several churches to remember those people lost from the villages and towns 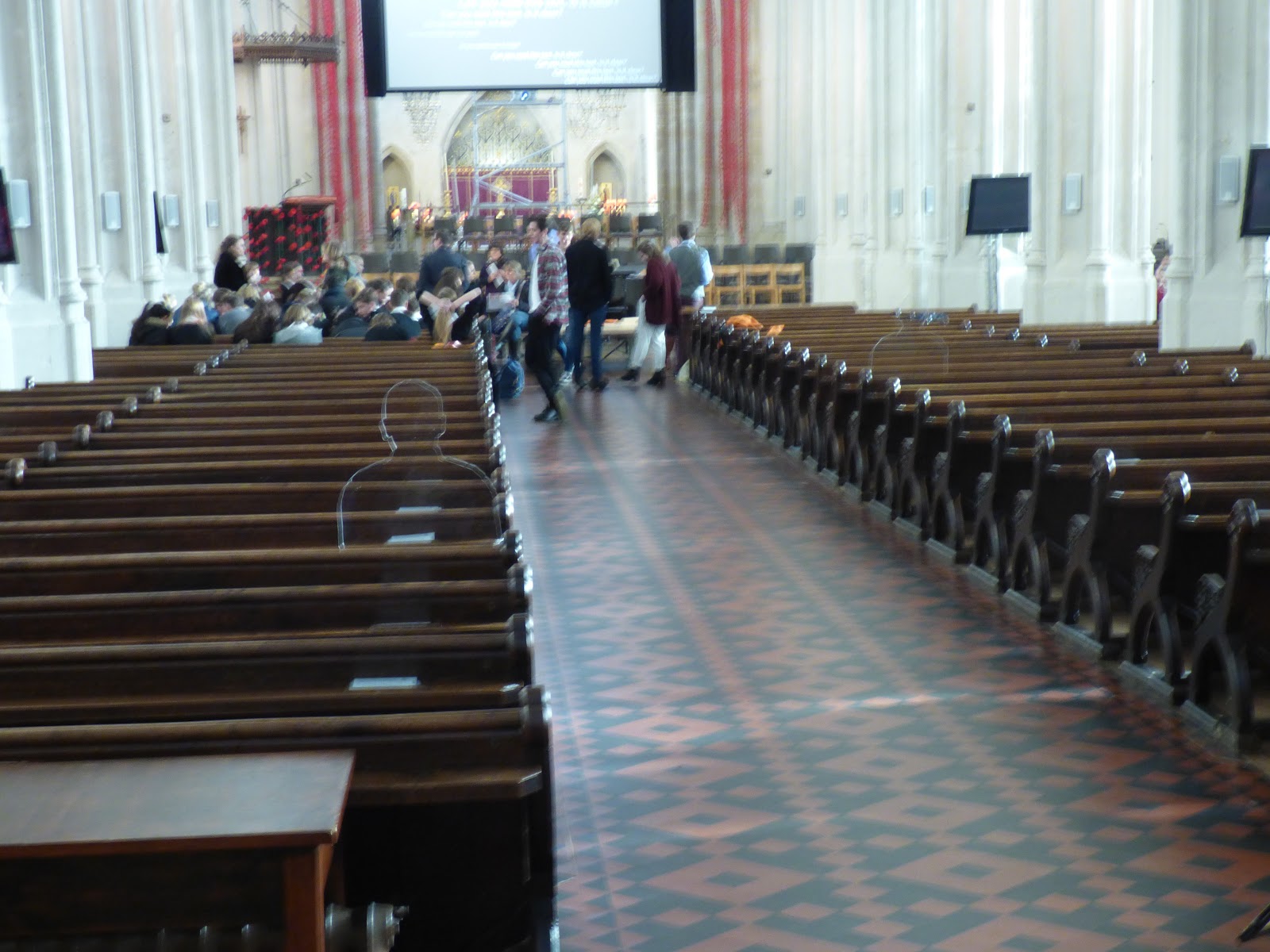 The figure in close up. 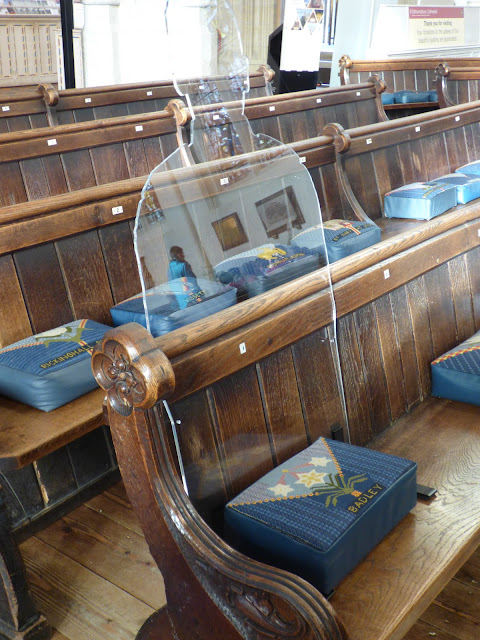 The kneelers in the Cathedral were created in the 1960's. each have the name of one of the villages in the Diocese.  I would have looked round to find my local villages if the place hadn't been full of schoolchildren!

A Model of the cathedral and at the back is the beginnings of a larger lego model being built brick by brick as the bricks are sponsored to pay for more refurbishment. 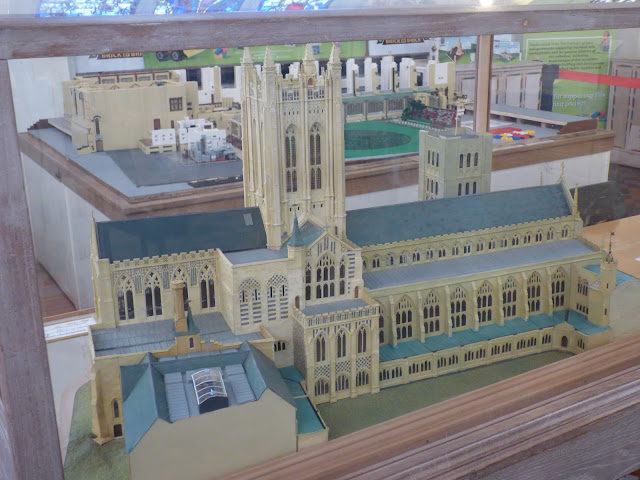 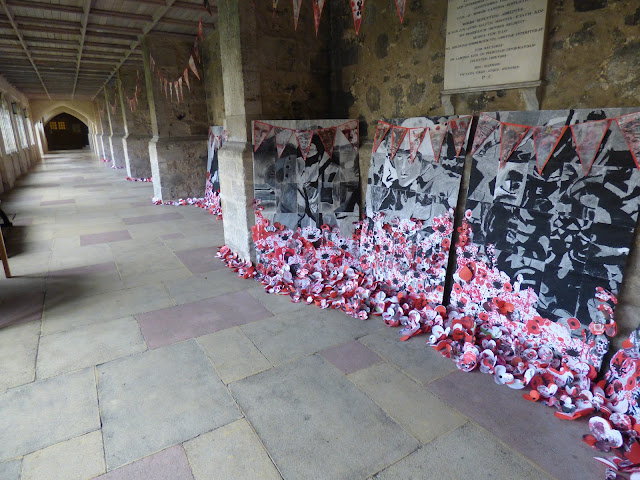 Another view of the Cathedral from the side 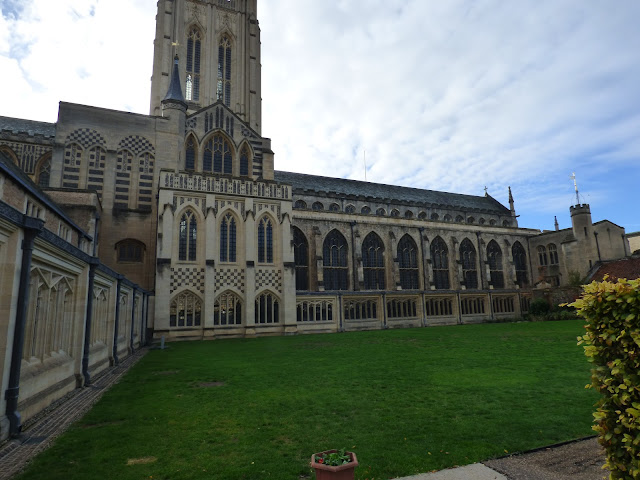 On the left of the photo the buildings are newer, but matching the old and housing offices, a cafe etc 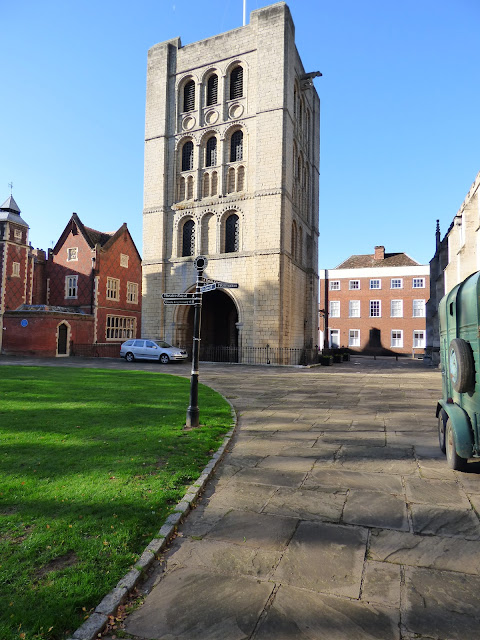 This is a drawing of how the abbey would have looked back in the C14, all gone apart from the few ruins and the Norman Tower which is easy to spot with what was then just the  parish church of St James to the left of it and the Abbey Gate on the left edge of the picture and St Marys church - bottom right corner. So many houses in the town must have been built using materials from the abbey after Henry VIII and the dissolution 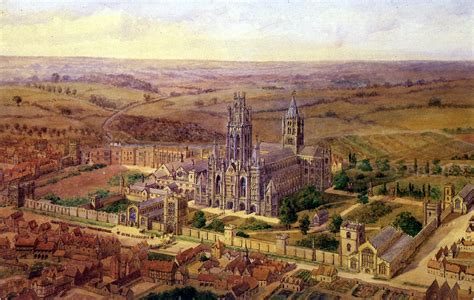 In the early years of the 20th Century, the Church of England was at the apogee of its influence and self-confidence. The time was right to carve up the dioceses of England into smaller patches which could be more easily in touch with their parishes. Parts of the Diocese of Norwich and the Diocese of Ely were brought together to form a new diocese which would eventually take the name of the Diocese of St Edmundsbury and Ipswich.

And yet it might not have been called that at all. The first task for any of the new Dioceses was to choose a church to become its cathedral. For some this was easy and obvious - Essex's new Diocese would inevitably be seated at St Mary, Chelmsford, and that of south Hampshire at St Thomas, Portsmouth. But the new Suffolk diocese, which would cover all of the county except for the Lowestoft area, had a problem. There was no obvious church that stood out as a potential for a new Cathedral. The chosen building had to be big, but it also had to be suitable for expansion; historically important buildings would not lend themselves to being knocked about. Ipswich had nothing to offer except St Margaret, which was not big enough and too architecturally important for ruthless expansion, and St Mary le Tower which was big enough for a starter, and not historically important; but on too confined a site for expansion, and in any case without the gravitas a cathedral requires. Southwold, which is near to what was at the time believed to be the original Suffolk see at Dunwich, was big enough; but it was too valuable to be extended, and in any case too remote. The other great Suffolk churches, Lavenham, Blythburgh, Long Melford, Stoke by Nayland, and so on, were obviously too remote, as well as being too important to touch. The choice came down to the two Bury St Edmunds churches, and the final choice seems to have been made because St Mary had too many medieval survivals to make extension acceptable. No, only St James would do.

Many thanks for comments on the favourite music posts

Posted by Sue in Suffolk at 06:00
Email ThisBlogThis!Share to TwitterShare to FacebookShare to Pinterest
Labels: Bury St. Edmunds, Suffolk Churches