You might have wondered why there was suddenly a combine photo appearing on the blog yesterday.
I did too! Got quite a surprise when I turned on the lap top this morning.
I found the photo from last summer to show Jacob what the real one looks like as we have a small toy one here - although ours as Jacob pointed out,  has no man driving!
I must have pressed publish as we don't really have combines in Suffolk in April!


Anyway.................
Thank you to everyone for comments on Saturday, it was a busy weekend and lovely to have Grandson Jacob staying again. He grows up so much in between times - unfortunately the getting-up early-very-excited phase is still ongoing!

In your birthday month it's a tradition to have a bunch of flowers as a gift at WI. These are my tulips from big WI. I think they had been bought several days earlier as they soon flagged. 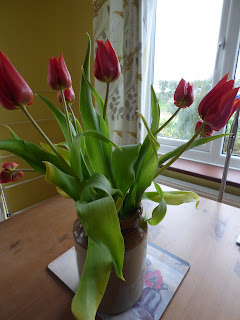 We were all given a pin badge to celebrate 100 years of Suffolk East Federation. How do I remember to wear it for the meetings this year? 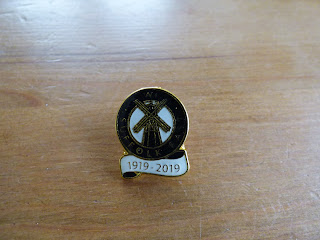 Our speaker at Big WI was very interesting. She told us all about being an umpire at Wimbledon, this year will be her 38th year.
It takes many years to become qualified enough to be one of the team that works at Wimbledon through the two weeks of the tournament - when I say works they are all volunteers and are not paid. They also have to pay for their accommodation,  she said she is lucky as she has friends in London who have a flat she is able to use for the duration. But they do get vouchers to use in the restaurants for 3 meals and snacks each day. They are also given all their uniform - jacket, trousers and skirts for the ladies, hat and shirts. They have to go for a fitting every other year so mustn't put on weight in between!
To keep qualified they also have to volunteer at other tournaments through the year so not something lightly undertaken. Wendy  is a single lady and runs her own business so is able to take the time needed.
There are 366 officials at the tournament either line umpires or chair umpires and they will officiate at over 650 matches. When they arrive each day they get a schedule to tell them which team they are in and on which court and they then work one hour on and one hour off right through from 11 in the morning if they are on the outside courts and possible until 10 at night if they are on Centre Court with the roof closed and the lights on. There are 9 in a team on the main courts and 7 on the lesser courts.
At the end of the tournament they are given a certificate and  special  trophies after (I Think) 10, 20, 30 and 40 years. She wants to keep going until her 40th year.
She told us how rude some of the players are to the ball boys/girls and to the umpires which doesn't sound fun at all, and how some of the young players have a competition to see how many items of Wimbledon memorabilia like towels they can acquire while they are there.
She will be there again ready for the first day on 1st July - I'll be watching.......on TV.

The speaker is always followed by coffee and cakes of course.

Posted by Sue in Suffolk at 08:27
Email ThisBlogThis!Share to TwitterShare to FacebookShare to Pinterest
Labels: WI