There was some  income........
In the workshop I found some bits of copper pipe, about a dozen, some 5 foot long and a few less than a foot long and also a small roll of lead. I could have cleared them out by taking them to the Household Waste Recycling centre but decided to take them to the big Scrap metal place where we used to take stuff from the smallholding. I'm glad I did because it put nearly £27 into the bank.

The ring that was too chunky for me that went into a higher value jewellery sale  in April netted me over £70.

Almost two years on from his passing away the final money from Colin's Dad's will arrived - all a good help for me until state pension time.


The expenses this month have included all the usual stuff......food for me and the cat, diesel for the car, charity, phones and broadband direct debits.

Then I had to spend out on ......
- more peanuts and fat balls for the birds - bird feeding costs a fortune, but how do you stop once you've started? and hopefully I'll never have to.
- another 500 litres of heating oil at the beginning of the month when the weather turned chilly again and I don't like the tank getting too low.
- The TV Licence (and please don't say it's not a "have to" spend- it is for me!)
-Extra food for family weekend
- Hotter shoes for summer - replacing ones that had got very tatty over the last two years - I was really pleased they had done some prettier shoes in their wider fitting. 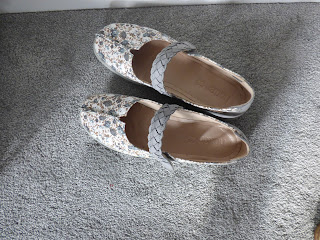 Was there anything at all that could actually count as frugal?

No..................... apart from using my Morrisons More £5 voucher and  finding the cheap printer ink.
The usual things like free library books
Rhubarb and chives and two servings of asparagus from the garden.

Still clearing out..........
The car boot sale stuff is still under the stairs, hopefully it will come out and get sold in May.

Posted by Sue in Suffolk at 06:00
Email ThisBlogThis!Share to TwitterShare to FacebookShare to Pinterest
Labels: Frugal Month Notes