A couple of weeks ago I decided to sort out my bike. I've only ridden it once  or twice since we moved here - there's nowhere to bike with purpose - and the tyres were flat.

Pumped up the tyres with the compressor and they were OK, then I took off the really tatty and almost rotten panniers and  unfixed the rusty back basket. Then I remembered that last time I rode it it was painful on the old tailbone on the rough country roads round here.

So while I was in town two weeks ago I went to the bike shop and got a gel seat cover, brought it home and it wouldn't fit - not deep enough. So last week I took it back and paid a bit more for a foam spongy seat. Got that home and found it was harder than the seat I already had.........so back to the bike shop on Saturday with BIG apologies to the Bike Shop Man and got my money back.

Anyway, as I was in Stow for the second time in one week (annoying) I did a tour of some of the charity shops and discovered a whole row of the River Cottage Handbook Series (Bread,Fruit, Fish, Cakes, Preserves etc) but I was very good and left them there because I've already got the ones I want at home! Now and again I have to remind myself that I no longer buy to sell! Then I noticed something tucked in the end of the shelf - Oh Goody........ a Grey Persephone. 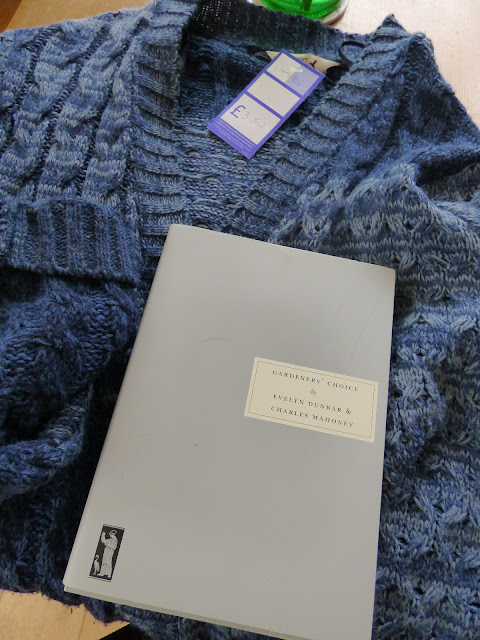 Persephone No 114 Gardeners Choice - one of their few non-fiction books. First published in 1937. Snapped it up for £2 PDQ.
The authors were artists who were both at the RCA , he a tutor and she one of his pupils. After working together on a huge mural for a private school in Kent they collaborated on this book. The line drawings of all the plants and the little drawings of gardeners by Evelyn Dunbar are so good. She was such a talented artist and was the only salaried woman war artist during WWII. There is a summary of her life and work in an Afterword to this book by her nephew Christopher Campbell-Howes.
This got me curious about her biography written by Gill Clarke but sadly the library don't have it in stock and it's a bit pricey on Amazon. But the library do have a book about The Women's Land Army also by Clark that features some of Dunbar's paintings, so I've ordered that instead.
I love how finding a book in a charity shop - that I would never have thought about looking at otherwise - leads to a journey of discovery about someone I'd never heard of.

The book is laying on my other weekend bargain - a nice cardigan also from a charity shop for £3.50.

So two trips to town in one week wasn't such a waste of time after all.

On the subject of Persephone Books, the Persephone Biannually booklet arrived this week with information about their two spring publications and their plans for their 3 Autumn re-prints. They are still getting worried by Brexit as their books are published in Germany (they were so strongly Remain and very anti- The Leavers vote that it upset a lot of their readers). I do nothing to help their cause by only buying Persephones second-hand!............. And had one from my Amazon wish list for my birthday too. I now have a lot more than I did IN 2015! Thanks in part to a very kind blog reader who passed some to me a few years ago. On the old blog I had a Persephone Books Label but not here, so I've rectified that and if you want to see more about this company the post is HERE.

Storm Hannah blew through on Saturday bringing heavy rain to parts of the country. What did we get up the lane? 2 spits and a spot that dried up straightaway with the wind blowing a hooley around the house and garden. Although the weather was rough enough to put paid to weekend boot sales.


Posted by Sue in Suffolk at 06:00
Email ThisBlogThis!Share to TwitterShare to FacebookShare to Pinterest
Labels: Charity Shop Finds, Persephone Books