Small WI  was really interesting too, especially for those of us born and raised locally.
The speaker was a founder member of the Stowmarket History Society and gave us a brief history of Stowmarket. He does much more specialised talks to History Societies, so is used to speaking and had really good photos.
Starting with the Romans - a small Roman Villa was found  when the bypass was built. Next the Angles (Not the Anglo Saxons, which is how we usually think of them because they invaded at the same time) The Angles lived mainly in Norfolk and Suffolk - The North Folk and South Folk, whereas the Saxons were south in Essex - The East Saxons, Sussex - The South Saxons and the old area called Wessex - the West Saxons.
He had information about the early industries,( Maltings...... even more the Burton-on-Trent which is known as the home of brewing) the coming of the railway and the old canal which was once navigable all the way from Ipswich to Stowmarket. Lots of the history I knew - like the story of John Milton (the bloke that wrote Paradise Lost) who stayed regularly with the vicar of Stowmarket in what was then the rectory but is now the council offices and registry office ( where Col and I married in 1979);  The  Explosion at the Gun-Cotton factory in 1871 in which 24 people died, buildings in Stowmarket collapsed and vibrations from the explosion were felt 30+ miles away;  and the story of the only WWII bomb that fell on Stowmarket - flattening the Congregation Church (my late mum was a teenager in Stowmarket at the time).
I didn't know that there had once been two smaller churches at the same time on the graveyard around  what is now one bigger Parish church - how strange.And none of us knew that the one remaining maltings in the town make the barley malt extract that goes to make  Maltesers

Small WI always do a big spread, not just coffee and cakes but sandwiches too - I ate too much this time and regretted it all night!


My birthday posy from small WI 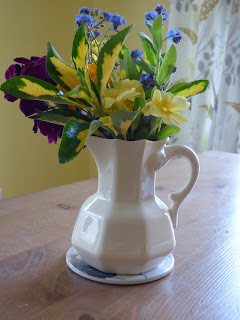