Confessions of a Craftaholic

In fact DEFINITELY NO CRAFT STUFF.

But by some almost unbelievable  co-incidence, just one day after Sooze wrote about cardmaking and Aldi having some craft things including a die cutting machine on their Mothers Day Special Buys.............look what I found at the last Saturday's Big boot sale at Needham Market.

Among the boxes of house clearance stuff I spotted this. A small die cutting machine. 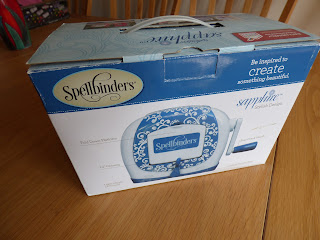 I couldn't believe it. In all my years of card-making this is something I've never owned.(I added the Sissix Big Shot to my Amazon wish list once but as it was over £100 it never arrived from Santa or from anyone else!).

It seemed to have everything except dies so I asked the bloke if they had found any metal bits with shapes cut out of them but he hadn't a clue what I was talking about so I said there is no way to find out if it works without them so he sold it to me for £3. Bargain...I hope. Its a very small die cutter nowhere near as big as the box it's in. Luckily it does have the instruction leaflet. Must look out for some  dies at car boot sales, should have looked in The Works while in town to see what they had but completely forgot .

So instead of giving up on card making, looks like I'll  be carrying on!