St George and his Dragon?

The Irish celebrate like crazy on St Patrick's Day but us English have virtually forgotten about St George's Day. It's not surprising really as there is nothing much known about him or even if he ever actually existed.
The legend seems to date from the C12, when crusaders returned from battle and historically he might have been a high ranking Roman Christian martyred in Palestine in AD 303. Edward III made him our patron saint in the mid 14C when he founded the Order of the Garter. Wiki describes it HERE.

For centuries the day was celebrated with feasting and jousting and mumming plays on the theme of St George and the Dragon . The traditions carry on in a few places.


"To save a mayd, St George the dragon slew,
A Pretty tale if all is told true,
Most say there are no dragons;
and this say'd there was no George;
Pray God there was a mayd."

St George he was for England,
And, before he killed the dragon
He drank a pint of English Ale
Out of an English flagon.

This is the traditional day for picking dandelions to make Dandelion Wine (but only if the sun is shining so the flowers are fully open)
Pick 2 quarts of flower heads, (about 1lb in weight) discarding as much of the green as possible.
Place in a food safe bucket or non metal bowl and then pour a gallon of boiling water over the flower heads and leave to steep for 2 days AND NO MORE. On the 3rd day pour everything into a big pan, add the peel of 4 oranges and boil for 10 minutes. Add 3lb of sugar and stir until dissolved. When cool add the prepared wine yeast and nutrient starter. Strain through muslin into a demi-john. Fit an air lock. Rack into bottles when clear and it should be ready to drink at Christmas.

There are certainly plenty of Dandelions about this year, I did make Dandelion wine once......never again! 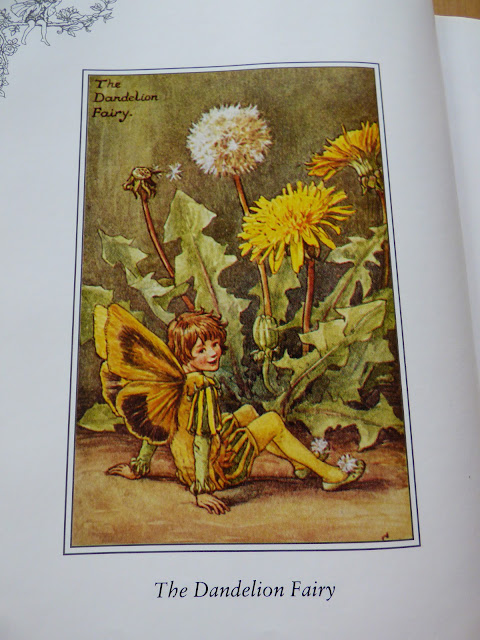 And the poem that accompanies it. 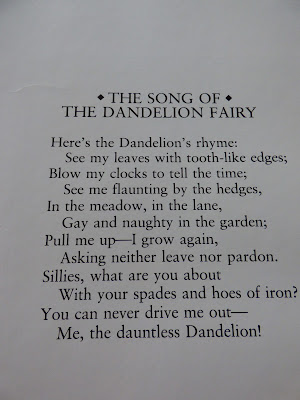 Posted by Sue in Suffolk at 06:00
Email ThisBlogThis!Share to TwitterShare to FacebookShare to Pinterest
Labels: Flower Fairies, Folklore, Saint's Days