According to Richard Mabey's book 'Food For Free' - There is a widespread belief that wild gooseberries are bird sown from garden varieties..........but the species is almost certainly native.......The history of the gooseberry's domestication from the wild to dessert fruit is one of the most extraordinary stories of vernacular plant breeding. Cultivated gooseberries were not known until the C16 but by the end of the C19 there were as many as 2,000 named varieties. The improvement was due almost entirely by the ingenuity of amateur growers, especially in the Industrial Midlands, who were spurred on..........by annual competitions.

The first money I ever earned was by picking gooseberries.......I would have been about 13 at the time, it was on a fruit farm in the next village to where I lived. The farmer, Mr Noy was terrifying, he got really cross if we had any leaves in our buckets.

There were a few gooseberry bushes at the smallholding when we moved in and they were always a good seller, so we added several more. I spent hours picking punnets full every June. By the time we had to move away I think it was well over 100 x 500g punnets every year and I tried to make sure there were never any leaves included!

Two gooseberry bushes were planted here two years ago when we arrived and last week  I picked most of the fruit off. It came to 3lb and I'll use some to mix with strawberries to make jam. The combination works well as long as the gooseberries are cooked separately until they are really pulpy and soft. The strawberries are cooked a little, then the fruit mixed together before the sugar is added. The finished jam is red and tastes like strawberry but sets well without needing pectin. 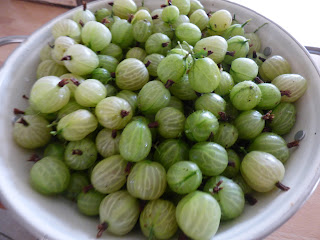 There's still some fruit left on the bushes to clear later. Hopefully they'll be enough to make a couple of jars of Gooseberry and Date Chutney to give away.


Posted by Sue in Suffolk at 06:00
Email ThisBlogThis!Share to TwitterShare to FacebookShare to Pinterest
Labels: Gooseberries