Just a regular weekly round up of everything not mentioned in separate posts.

An electrician came two weeks ago to repair the faulty socket which had tripped out the electric. I booked him up to do new lights for the kitchen and new sockets for the garage too, both old and needing replacing and he was back  last week to sort those two small jobs. I now have to do a bit of painting on the ceiling where the VERY old-with-cracks spot lights were removed, the new ones are a bit smaller but up to date with LEDs and much brighter. Also must remember to get some satinwood paint for the kitchen skirting boards which were  replaced. There was enough kitchen paint to do the walls where the fitting of the new units had left scratches and scrapes.

Monday this week was a gardening morning, the weather was just right and I did lots of grass cutting and weeding, the second sowing of beetroot seeds have all come up after the first sowing were so sparse - so many that now I need to thin them - typical! I put in two more rows too.
Tuesday afternoon there was some nice steady rain to water everywhere and add a bit to the depleted water butts.

I woke up Wednesday feeling rough - headache and feeling sick - not something that happens often thank goodness, but meant I had to cancel an appointment and visit to Youngest and Florence. Coincidentally I got a text from Youngest saying Florence had woken up with a sickness bug so best for me not to visit. Rescheduled solicitor appointment and visit for next week. Later in the day I felt better so more gardening. Re-potted the Acer in the header and another Hosta into bigger pots and that freed up a pot for the Olive tree
Lots of weeding done too and tying up things - like the fig which had gone a bit floppy after the rain.

Just after 7pm I heard a big roaring nose and rushed outside to see 4 of the Dakotas which had been among the 20+ that had gone from Duxford to France in the Normandy Landing D Day 75th Anniversary Commemorations. They were flying North East back to wherever they are based.  I know the whole lot had crossed Suffolk on their way out but much further south over Sudbury and then Essex. I watched bits of the TV programmes.........amazing that so many 90 year olds were able to travel back to France and so many stories they told of being young men landing on the beaches.
Then more steady rain on Wednesday evening too - good for the garden to have rain two days running.
I watched a few bits of the D Day service in France on Thursday, looking out for the hospital chaplain who took Colin's funeral last year. She is chaplain for the Normandy Landings Veterans and that was why we had a longer wait for the funeral as she is out in France for the first week in June every year. She is the ideal person for the job as she was an army chaplain with the rank of  Major before first of all working in a parish and then in the hospital. I only caught sight of her in the distance on TV.

And then............... Bread Baking. I didn't mention this at the time because I was waiting to get some fresh yeast and try it out, but at the Haughley Garage/yard sale a few weeks ago I bought a small bread maker for £3!! The man selling said he had no idea if it worked as it had been passed to him to sell. I looked inside and everything was there, including instructions, with no rust although the outside looked very dusty, we struggled back to Son's house (typical - the bread maker was at a house the opposite end of the village to their house!) and I took it home and had a go with the yeast I had in the fridge - which turned out to be VERY out of date. It was edible but not well risen.
With new yeast, a nice little 1lb loaf 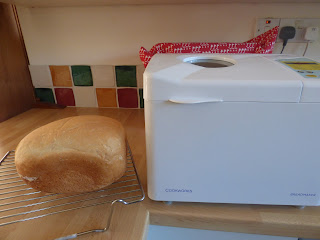 Cut in half and half frozen they will last me two weeks and SO much better toasted than any loaf you can buy and no sticky, doughy things to wash up.
I knew if I waited long enough a cheap bread maker would appear somewhere!
And thanks to moving things out to car boot sale I've got room to store it out of the way in a cupboard.

The forecast for Friday was awful, strong winds and torrential rain so I planned a morning in the kitchen making a batch of pastry cases for the freezer, tidying cupboards, writing a shopping list etc. Did all that and it still wasn't raining so I managed to get all the brambles and nettles from out of the front hedge too. The heavy rain didn't start here until half past two - then it wasn't quite as nasty as the weather men said.......that's coming today apparently!

Other than all that the  rest of the week passed with Swimming, lots of grass cutting,  shopping, a visit to the Household Waste site (I'm becoming a regular), reading and browsing the library website to see what new books they have on order (a very handy tool for ordering new books).

This week I am Grateful For

Hope you all have a good weekend, avoiding the nasty weather of Storm Miguel if possible