It's Saturday Once More

No swimming again - I rang to check and the lady there told me the electrical surge had done more damage than first thought and parts for the pool heating were having to come from Belgium! They're hoping to be open next week but not definite, have to ring again.

The very windy weather 2 weeks ago had pushed over a small pollarded willow. It couldn't fall further because it was in the ditch but it was sticking out over the footpath that goes down the meadow. I texted BiL to see if he had a spare half hour and he had (that was a surprise!) so once again I cooked him dinner in return for chainsaw work......thank goodness he's not too far away. Hardly any useful wood from it as the biggest bits were only a couple of inches across.

I thought about going to the cinema to see the film 1917 (it was on in the afternoons in Stowmarket) but the temptation to stay at home and light the wood-burner was much greater!  I'll add it to my list of DVDs to borrow from the library when it's available.

All the logs that came from the trees cut down nearly two weeks ago are now stacked up on some pallets to dry and season reading for splitting sometime in the future. I couldn't get the ride on mower to start to use the trailer even after putting the battery on charge, so ended up using a wheelbarrow and carrying the rest one or two at a time - good exercise! 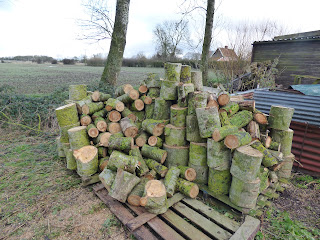 Got the mower to start in the end - so just hope it's the battery getting old and taking longer to charge up. It would take a VERY long time to cut all the grass here without it.

Tried out the car seat with eldest granddaughter - it's so blinkin' complicated, push this, pull that - they were simpler back when my lot were little - probably safer now but certainly more expensive. Anyway Florence and I went to see the sea at Aldeburgh - it was flat calm but grey and misty, we threw some stones in, looked at the huge seagulls, spoke to a fisherman ............the one who owns this boat below, although this picture is from Internet and obviously taken in summer - yesterday it was as damp and grey and foggy as everywhere else in Suffolk! He showed me what damage seals do to his nets.
There are now so many seals coming to breed on the Norfolk coast  they are having to move south to find food. He said there will soon be no fish for him and the others who fish from these small boats.  Once there were about 300 young seals born around Norfolk coast each year, last year there were 5,000, because they are so protected............... but they are ruining the livelihood of local fishermen.

And Finally.....................
Anyone else been watching the Indoor bowls championship on TV last week? I was half watching on Friday afternoon but ended up turning off as there were so many people in the audience cough, cough coughing.  It sounded like a wonderful place for catching something nasty!

(plus a P.S. to my penfriend W on a windy Scottish Island, many thanks for the gift for grandchild number 4, it's beautiful- hope baby arrives soon, DiL is getting quite fed up)

Have a good weekend
Back Monday
Sue

Posted by Sue in Suffolk at 07:00
Email ThisBlogThis!Share to TwitterShare to FacebookShare to Pinterest
Labels: Being Grateful, Firewood, Grandchildren