What to Clear Out Now?

I've been clearing out unwanted things from the house ever since Colin died, mainly because I know I'll have to move again sometime and will be downsizing when that happens.

It's getting more difficult to know what else to get rid of.

Let's look in a cupboard so you can see what I mean - This cupboard is in the back porch-way over the washing machine. 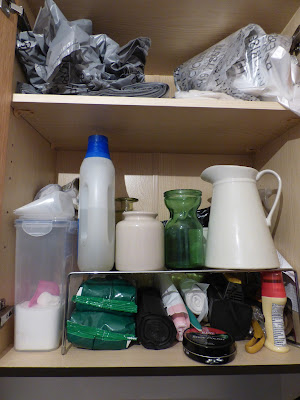 Here's another cupboard, this is in the kitchen. There's the cat food that's in use with spare bags of dry food at the back behind the food in use (Spare boxes of wet food are out in the garage). Then on the left is the jelly straining bag and stand with the jam pan, funnel and spoon. 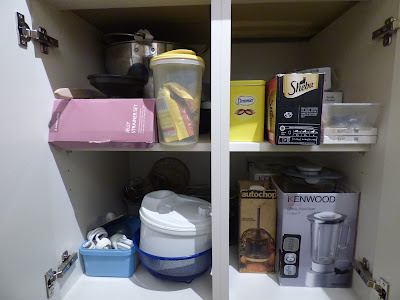 Underneath on the right are the liquidizer and behind that the food processor for my Kenwood and my very old chopper thing that I've had for 45 years. On the left at the back are other bits for the Kenwood (whisk, nut grinder,etc) and my mini cake tins, steamer saucepan and blanching basket. At the front is the salad spinner, a plate cover that gets used often especially in summer and a box full of various spare light bulbs.
But nothing really to get rid of - maybe the chopper thing - haven't used it lately but it's a useful gadget sometimes and not electric.

I've been round the house looking in cupboards many times now and there are very few useless things, unless you count things merely decorative - like my mini jugs and other bits and bobs on the dresser, 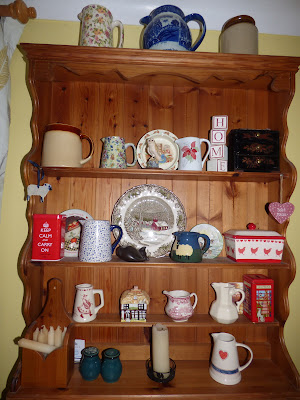 which I discovered,  after putting the photo on here, could do with a bit of dusting and tidying and re-organising.

I could get rid of all this lot, take the shelf top off the chest of drawers below and leave a bare wall, but that seems extreme.

Then Sue's (A smaller and Simpler Life) post about Tea Towels gave me a nudge, that's possibly something I could sort.

I'll show you my tea-towel "collection" another day!

Posted by Sue in Suffolk at 07:00
Email ThisBlogThis!Share to TwitterShare to FacebookShare to Pinterest
Labels: House and Home