BiL Andrew came back last Sunday, as promised, with the log splitter, to start on the logs from the poplars and willows which the tree people felled from behind the workshop in October 2017.

I didn't take a photo this year but found one from last time he brought it round, which turned out to be longer ago than we thought....... 12th March 2017, not long after moving in.
The log splitter - which is a converted dumper with a hydraulic bit on top,  is still going despite looking like it was on it's last legs nearly three years ago. It's in regular use in BiL's  wood supply business. He and a friend pay to take fallen wood from a woodland in summer then in winter they split and bag it to sell. He says they've been very busy this winter so far. 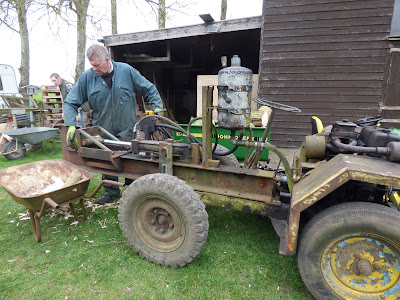 Back in March 2017 Colin was relatively OK, although he didn't look very well. The doctor had put him back on steroids so he had a bit more energy, you can see him pushing a wheelbarrow in the background, we were waiting to see what would happen next after finding that his own bone marrow transplant hadn't worked.

It seems an age ago now.

Anyway, thanks to Andrew two thirds of the logs are now split and added to what he cut the other week to make two giant heaps, taller than me, in the wood shed. They are very wet from sitting outside for 2 years but I won't need to use them until  spring 2021 so will have dried although they are poor wood and burn too quickly. 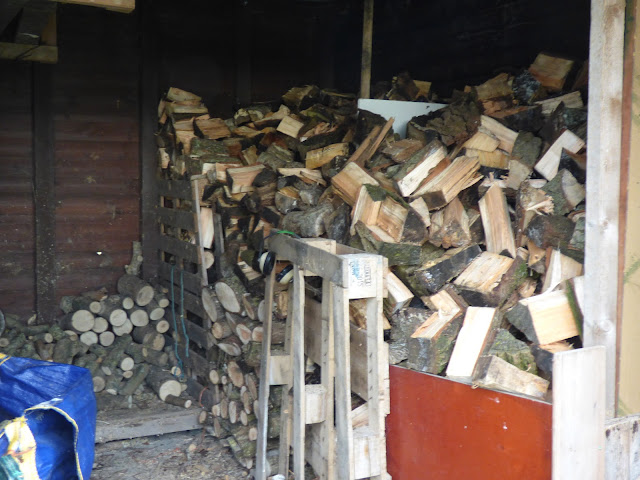 Once I've emptied two out of the four builders bags full of wood that I'm using this year.I think Andrew will come back with the chainsaw to finish the few logs that he didn't do last time and there's also lots of odd small bits in the workshop that need cutting ready for splitting for kindling.

I've contacted the tree cutting people who are coming to look at what can be cut down and left to season. Brother in Law reckoned I might have moved by the time I need more wood but I said if I'm still here it will be no good waiting 'til it's run out as I doubt he'll give me mates rates if I have to buy it off him!.


Posted by Sue in Suffolk at 07:00
Email ThisBlogThis!Share to TwitterShare to FacebookShare to Pinterest
Labels: Firewood