Hiya, I'm back - not that I've been anywhere. Many thanks for comments on the New Year post. Having a few days off blogging has given me time to sort out some things to write about for at least the rest of this week.

I don't know if  it was an omen for a good year but opening the bedroom curtains yesterday morning I spotted a hare passing through the garden - it's been a while since I saw one. (Although later I found a half dead mouse in the living room - don't know what that foretells for January!)


The Twelfth night after Christmas marked the end of Yule festivities. All decorations had to be taken down and the holly and other green stuff would be burned. It was once thought that every holly leaf left indoors after this date would turn into a mischievous spirit.
In medieval times there would be games and feasting  and in Tudor times a masque or play would be presented and it was usual back then to have a Twelfth Night Cake which had a bean baked into it and whoever found the bean would be King for the day. That custom faded away when Christmas cakes became more popular.
Epiphany is the  Christian Feast day marking the visit of  the Wise Men from the East bringing their gifts to the baby Jesus.

My favourite thing for Twelfth Night is wassailing the apple trees. I've been doing this for years and it never makes any difference to the amount of apples but I'm ever hopeful. Last year was a poor crop - not quite as bad as 2012 but almost.

Although there is an old saying

Sun through the Apple trees on Christmas Day means a fine crop is on the way.
And there was sunshine here on Christmas day - so maybe this year will be better.


This year I was able to find out more about Wassailing from the book that I picked up at a boot sale last September. It has stories of old celebrations and accounts of all the "Re-awakenings"..........  that is new events that have started since the mid C20. 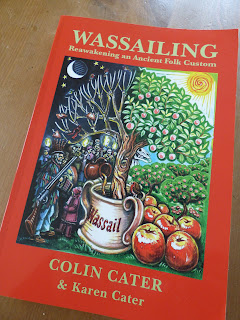 Also found this recipe  for a traditional Suffolk Wassail drink (according to a Lavender and Lovage website) Although in my 64 years in Suffolk I've never heard of it before.

My celebration involved soaking a bit of toast in apple juice and laying it on one of the biggest branches of the biggest apple tree and then pouring some apple juice on the roots......it should be cider but that's not something I have around................maybe that's why it doesn't work?
Then while hitting the apple tree trunk with a stick you have to chant .

In some places celebrations include firing guns through the branches, I don't do that....obviously, and I have to chant quietly to avoid worrying the next door neighbours!

If the weather is too awful for wassailing Apple trees on this Twelfth Night it's OK to put it off until the 17th which is 'Old Twelfth Night' using the calendar which was in use until 1752.

Posted by Sue in Suffolk at 07:00
Email ThisBlogThis!Share to TwitterShare to FacebookShare to Pinterest
Labels: Apples and Pears, Folklore, My Books