Hello and welcome to some more followers, hope you enjoy reading and also hi to some new people commenting.

I needed to go and pick up a new LPG cylinder for my cooker so thought it would be a good idea to call in at a village event..........not my village..............nothing happens here. But at Cotton they have Village Cafe once a month - breakfasts and some stalls - I had a chat with Colin's Aunt, who never seems like an Aunty as she's only 12 years older than me. (Col's Mum was already a teenager before this little sister was born). After my bacon roll breakfast and picking up the gas I came home a different way and saw some signs for a Jumble Sale........  so of course I went back in the afternoon to have a look.
It was Eye Scout Group  Jumble which I went to last year, so lots of children's toys and books. I found a big pudding basin to replace one that I chucked last year because it was badly crazed and two packs of children's card games, modern versions of some we had years ago. Had a go on the tombola and won................nothing as usual! 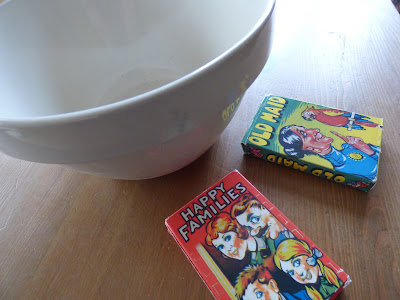 On Sunday I had a late 'Christmas' lunch round at BiL's house. Col's sister was there too as she had been to chapel. BiL had bought a reduced price turkey crown and wanted to use it up, without having to eat it all week - he's a much better cook than I am nowadays. I love baking but cooking for one is still a chore - I ought to get more organised with meal plans.........or something.

I meant to do the RSPB great garden bird-watch but didn't get round to it - and I'd cleaned out all the bird-feeders too. Earlier in the winter there were goldfinches but they seem to have vanished and the long-tailed tits only make an occasional appearance. I reckon it's because the weather has been so mild they are finding enough to eat in the garden and hedgerows. If winter isn't going to arrive until February or March I'd better order some more feed next month and a new peanut feeder as the one Colin made years ago it's falling apart.......squirrel proof this time so they can't bite through the plastic.

Posted by Sue in Suffolk at 07:00
Email ThisBlogThis!Share to TwitterShare to FacebookShare to Pinterest
Labels: Jumble Sales