Thank you to everyone for comments this week so far, especially about 'stuff' in the cupboards. If I didn't have room for all my possessions to be tidy then it would be time to move more out, but at the moment everything fits in, is used and tidy enough to find. I can't see any point in clearing out things that are used now and again because as sure as anything the moment I got rid would  the day before I needed it!
So the clearing out will slow down to just books.............oh and maybe the tea towels (a post to follow sometime!) My sister and I (mainly sister as she was closer) cleared out Dad's house after his death and he hadn't chucked anything out for years- there was an awful lot of junk, don't want to leave my lot with too big a job - even if it is  hopefully a long time in the future.

There was no swimming again this week. The pool has had to put in some sort of temporary boiler as parts for their old one are having to be made from scratch. That short power surge in early January certainly did a lot of damage.

I went for the free NHS 5 year health check and the nurse asked about exercise - and of course I hadn't swum due to the above, I hadn't walked due to my walking shoes being repaired, I hadn't cycled because the weather has been too wet and hadn't gardened for the same reason! Making me sound totally lazy - oh dear. (I've now got my walking shoes back - so no excuses - except for the weather)

But, just a little bit of proper sunshine on Monday enticed me out for half an hour to start the job of cutting back all the dead stuff from the quarter circle garden out the back of the house. I often think my gardening mojo has disappeared but it always comes back with fine weather. Although the fine day on Wednesday was accompanied by a freezing strong wind which put me off.

Took Polly to the vets again because once again she is constantly cleaning herself and losing hair. We agreed that there was no point giving her another steroid injection. Instead I've sent for  one of those plug in cat-calming things and I'm going to shut the cat flap at night so the mystery cat can't come in and Polly will have to use a litter tray (UGH) night time. ( I know all about microchip cat-flaps but it would be difficult to change it on the door, plus finding someone to do odd jobs is difficult).

I couldn't believe what I found after getting my shoes back and doing my first walk  down the field and back up the lane - someone has cut down the branch of the old apple tree that had the mistletoe on it.  I thought the wind had broken the branch but No it's been sawn through and is laying on the ground under the tree

WHY? and WHO? is what I want to know. 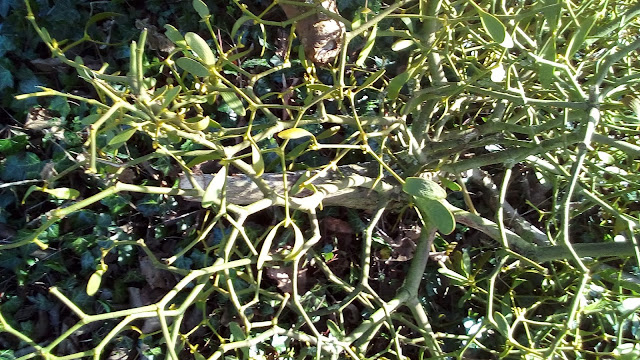 I'm a bit cross, but nothing I can do about it.

Posted by Sue in Suffolk at 07:00
Email ThisBlogThis!Share to TwitterShare to FacebookShare to Pinterest
Labels: House and Home, Mistletoe, Polly, Walking