First Jumble Sale of the Year

The first jumble sale of the year was well advertised - which caused problems as it was in a tiny village hall on some very narrow roads. Everywhere was completely jammed up and I ended up having to reverse quite a long way because someone coming the other way couldn't!
I thought about giving up and going home because by the time I'd gone backwards, turned round and found a space to park a long way up the road, the queue to get in was about 50 people.
But I stayed and everyone eventually squashed in and I fought to get to the tables of bric-a-brac and  then the book table and after all that..............I spent just £1 on 3 things 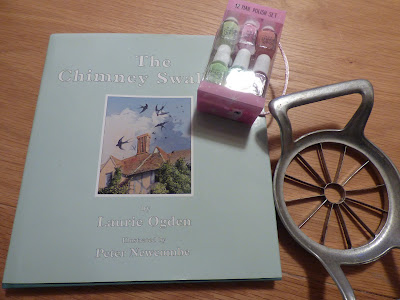 Never had an apple corer and slicer, so thought I'd try one. The 12 tiny nail varnishes will be for Christmas for the eldest of the 4 children in the lane. I always get them a little something and pretend that Santa delivered them to the wrong address - although the eldest two are way past believing!
And the book - Suffolk Author and Suffolk Illustrator - a book for children - curious to see what it was.

Next jumble sale in 2 weeks time I think...........a waste of time and money? probably, but they get me out of the house on a Saturday until the car boot season at Needham Market starts in March - a month later than usual...............I'm getting withdrawal symptoms!(And they are  finishing at the end of October instead of early December - very sad news for me)

Back Tomorrow
Sue
Posted by Sue in Suffolk at 07:00
Email ThisBlogThis!Share to TwitterShare to FacebookShare to Pinterest
Labels: Jumble Sales