Tucked away down a narrow lane in a small village not far from Ipswich, this church stands up high and has a lychgate - not many Suffolk churches have one.
This was erected in 1930 in memory of a mother who died in the late C19. 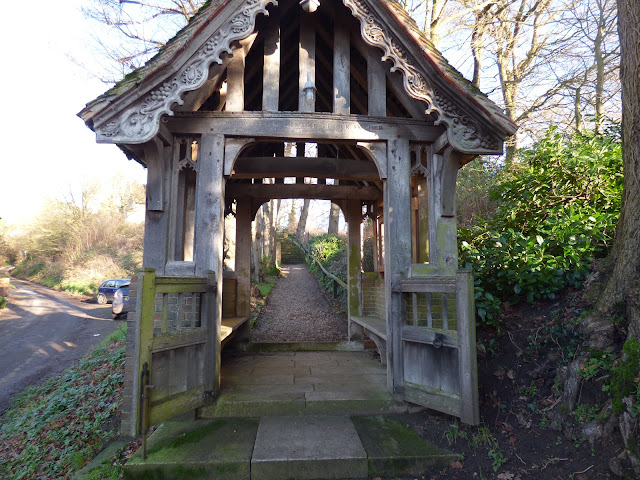 Through the lychgate and up a steep path, then steps 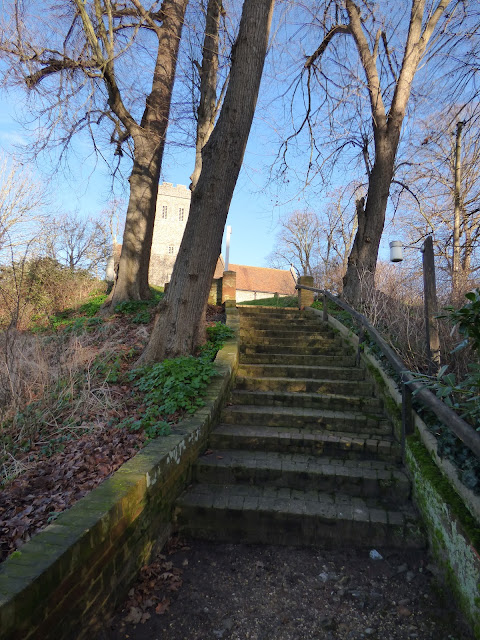 until finally you can see the church and one of the grandest south porch towers in Suffolk. 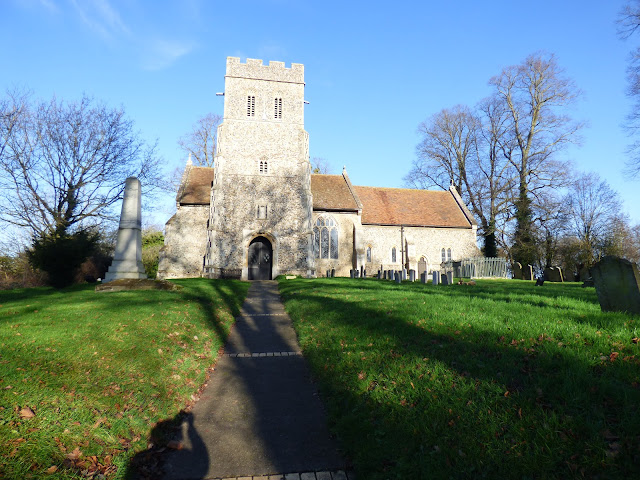 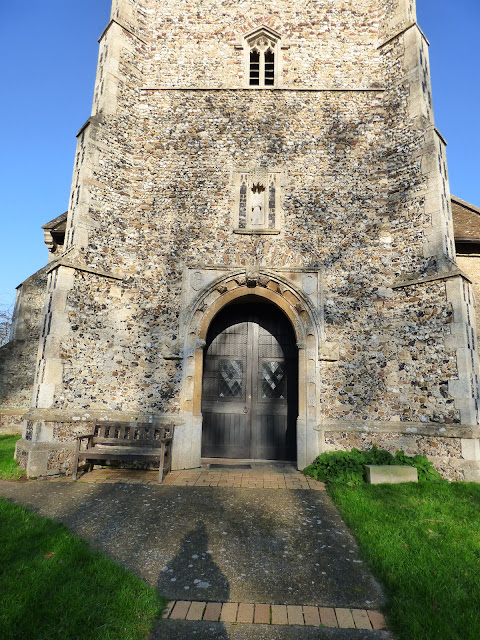 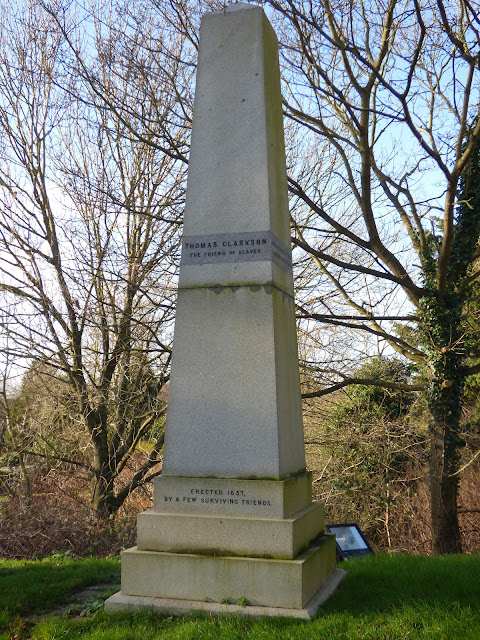 It says "Thomas Clarkson  The Friend of slaves"  and was erected in 1857 by 'a few surviving friends' Thomas Clarkson worked with William Wilberforce to persuade parliament to abolish the slave trade, leading to the Acts of 1807 and 1833. Clarkson died in Playford in 1846 and there are other memorials to him in his birthplace of Wisbech and in Westminster Abbey.

Inside is a small plain church, restored in Victorian times and very few older features remain 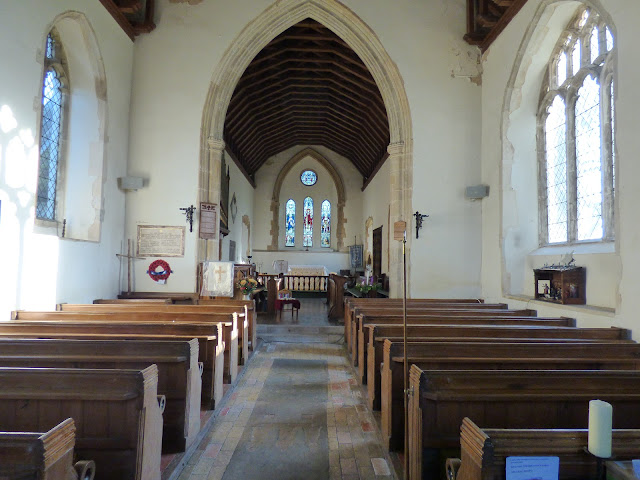 Stained glass over the altar 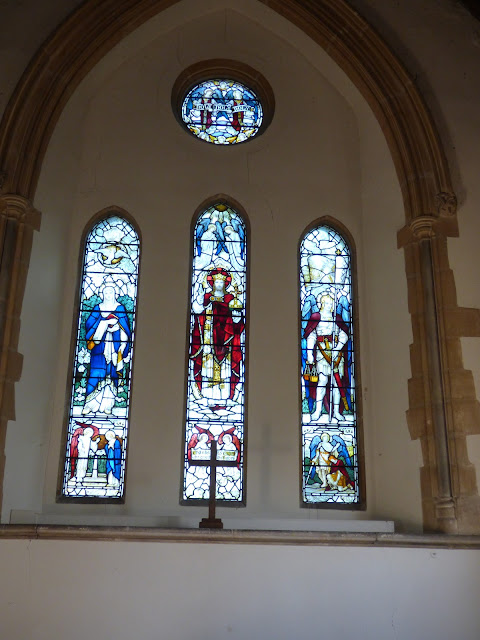 One thing that survived the Victorian modernisation is this  huge brass, nearly 5 feet tall for Sir George Felbrigg who built the tower and died in 1400. 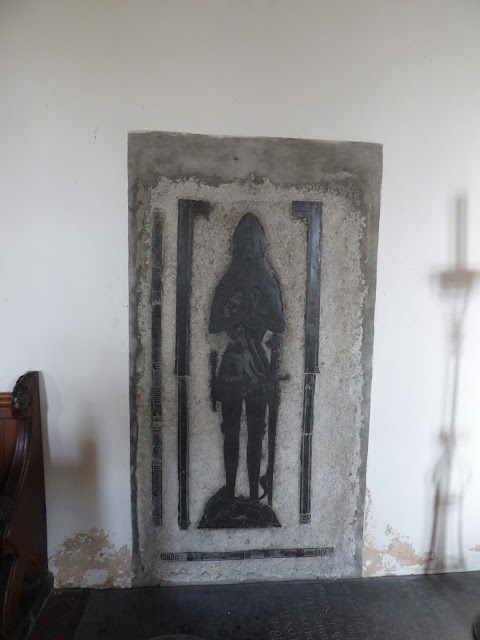 More about the church on the Suffolk Churches website

Thank you for comments about the local Mistletoe. I can see how it wouldn't be noticed when driving as it's on a bend but still can't understand why I've not seen it when walking, but walking roundabout here is on hold for a couple of weeks as I had to take my Hotter walking shoes back to the shop for repairs as a metal eyelet pulled right off last time I did them up. They'll repair them for free but it might take a while. I've only had them a year so wasn't best pleased.
Walking anywhere will be even muddier now  after the rain from storm Brendon passed over Suffolk. It wasn't too windy although the A14 over the Orwell bridge was closed on Monday and when I heard it might close on Tuesday afternoon I was glad my trip to Ipswich was early. Apart from going to Hotter the main reason to go was to pick up a child car seat bought secondhand for my car so I can help out with Willow a bit once her brother or sister arrives......won't be long now........very exciting......I take the phone upstairs every night ........just in case I have to dash over to Willow sit.


Back Tomorrow
Sue
Posted by Sue in Suffolk at 07:00
Email ThisBlogThis!Share to TwitterShare to FacebookShare to Pinterest
Labels: Suffolk Churches