This book kept popping up on the recommended pages on amazon last year and  I bought it without really knowing what it was (Stupid Woman!). If I'd known more about it and looked at her website I probably wouldn't have bothered. 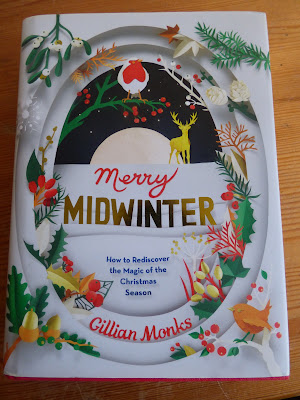 Gillian Monks is a Quaker, Theosophist (had to look that up....... THEOSOPHY, n. An ancient faith having all the certitude of religion and all the mystery of science. The modern Theosophist holds, with the Buddists, that we live an incalculable number of times on this earth, in as many several bodies, because one life is not long enough for our complete spiritual development; that is, a single lifetime does not suffice for us to become as wise and good as we choose to wish to become. To be absolutely wise and good—that is perfection; and the Theosophist is so keen-sighted as to have observed that everything desirous of improvement eventually attains perfection. Less competent observers are disposed to except cats, which seem neither wiser nor better than they were last year. The greatest and fattest of recent Theosophists was the late Madame Blavatsky, who had no cat.)
...........and I was none the wiser after reading that! and she is also a practising Druid  and lives in North Wales. The book is a pot-pourri of writing about aspects of Christmas, with recipes, history and little snippets from her own Mother's diary.

I've dipped in and out of this book -  published in 2018, and there are several interesting pieces but a lot I knew or already had information about in other books. It will be sold on after Christmas.

Because there isn't a Post Office in my village I tend to take parcels and things that need weighing whenever I'm out doing something else, I picked the wrong time last Saturday and had to wait for ages in a queue in the Co-op in Debenham  - that day I got all the cards off except those with letters. Then yesterday, on my way back from swimming I went to the PO in Eye and walked straight in and no queue - very unusual - so all the Christmas crime books and all the rest of my Christmas cards with letters are now winging their way around the country. We may moan about them but I think Post Offices and postmen/ladies do a brilliant job. When you think that it's cost me the same to send a parcel all the way to Tiree in the Inner Hebrides as it does to send a parcel to Essex that's pretty good. I wish PO's could have stayed open in more villages but there are a few left to use.
And compared to Hermes Parcel delivery service they are 100% better. I'm hoping that something I ordered will get here eventually but emails keep telling me there's been a delay and haven't heard a thing since Monday. On the village face book page I see I'm not the only person and apparently a new Hermes driver gave up after just two days due to the difficulty in finding some properties - in a place where there are no road name signs and houses are tucked away up lanes..... I don't envy them. Yet other companies like DPD who collect book parcels for ziffit never have any problem.

Posted by Sue in Suffolk at 07:00
Email ThisBlogThis!Share to TwitterShare to FacebookShare to Pinterest
Labels: Advent Photos 2020