I like a mince pie as much as the next person - but not dozens and not one everyday which is supposedly the tradition. So thought process when contemplating mince pies 2020................

I ought to make a bit of an effort - can't have Christmas without a mince pie
I'll just buy half a dozen from somewhere............ but they are often too sweet
I'll buy a jar of mincemeat and make some...........but the best is expensive and the cheapest is nasty.
I'll make some mincemeat like I usually do from the Delia Smith Christmas book.................but I haven't got all the ingredients and don't want to buy anything
I'll make mincemeat .....using what ever's in the cupboard plus a lemon!

This is the Delia Smith Recipe, which I've made lots of times - hence the mucky marks on the page. 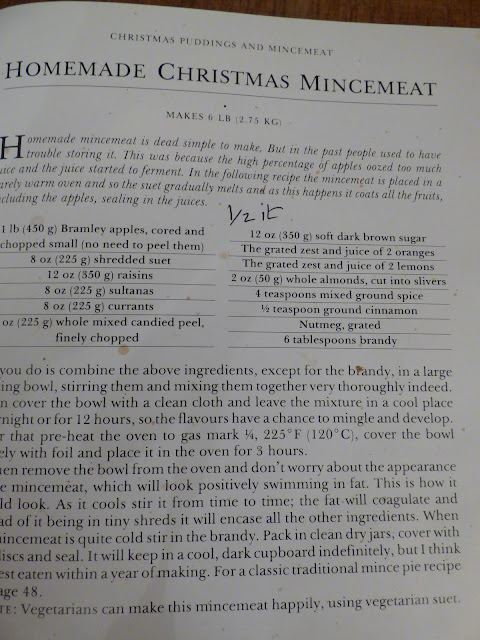 Decided a quarter of the recipe would be enough this year and swapped an eating apple for the cooking apple, dried read-to-eat apricots chopped very small replaced the raisins, light brown sugar replaced the dark brown and I completely missed out the chopped peel, the nuts and the orange juice/zest and  always use vegetarian suet anyway.  It looks like mincemeat and smells like mincemeat, so I'll let you know what it tastes like when the mince pies are made and tested.

Today's advent book has been around for a long time. The Ladybird Book of Well-Loved Carols was published in 1986. It has the names of my two eldest written inside in their writing. All the favourite old carols that we know so well are included. 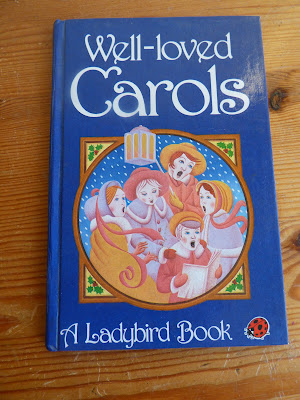 Back Tomorrow
Sue
Posted by Sue in Suffolk at 08:33
Email ThisBlogThis!Share to TwitterShare to FacebookShare to Pinterest
Labels: Advent Photos 2020, Christmas