Another Ladybird book that I've kept for years. First Published in 1988 and probably bought for my children or for ideas for the Cub Scouts, it was good for answering Christmas Quiz questions before we had the internet. 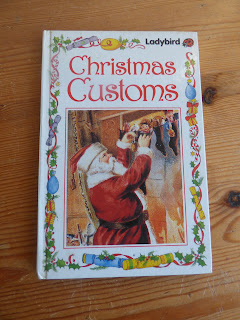 It's been a busy week here up the end of the lane, the final thing being the chimney sweep who came yesterday morning. Then I rushed off shopping to get a few bits before a lazy-ish week at home. On Christmas Eve I'll just pop to the fruit and veg shop in Debenham for a stalk of sprouts as there aren't enough left on mine here and the carrots that I was sure I'd bought in Asda but got home and  hadn't. How did I do that?

A few weeks ago I spotted some mistletoe within reach on a tree on a back road about 3 miles away so the other day went for a closer look but I reckon it had been sprayed with something as there were no berries and the leaves were turning yellow. That's the second time my attempt at local mistletoe has failed after the bunch on a tree close to home was sawn off earlier this year. Looks like my winter solstice greenery hunt will be just Holly and Ivy

I've enjoyed looking after the two youngest grandchildren for two afternoons while DiL had appointments. Youngest grandson is missing out on so much social contact by being an almost Covid baby (born beginning of Feb) there is just nothing happening that DiL can take him too, it's made him so clingy. When youngest granddaughter was little they were able to go to parent and baby group, baby music group and all sorts of other things. Poor little fella only gets to see his Mum, Dad, sister and me. Thank goodness Youngest Granddaughter is a happy little girl.

At last........... 12 days after the first email saying the Hermes courier was about to deliver my order - the parcel arrived yesterday. When I heard rumours that the arcadia group were about to go belly up I quickly ordered some black leggings from Evans as that's where I've been getting them from for years - nice soft black and stretchy. So it was a tad annoying to find on the local face-book page  that the replacement  Hermes driver had given up in despair and I'd given up hope of them arriving. They've obviously found a new driver with a bit more common sense.

And that was my busy week - Oh -  I also dug up and potted a rhubarb root to take with me to the bungalow and finished tidying the greenhouse stuff too.

This week I am grateful for

Back Tomorrow
Sue
Posted by Sue in Suffolk at 07:00
Email ThisBlogThis!Share to TwitterShare to FacebookShare to Pinterest
Labels: Advent Photos 2020, Being Grateful