Like yesterday's book this one was also reprinted as a Pan Heritage Classic in 2016 after first being published in 1985. A clever story set in the Cathedral close of the fictional town of Litchester,  and another that's been on my shelves for a while and will be a giveaway in a couple of days.

Litchester Cathedral, usually an oasis of cloistered calm, suddenly finds itself at the centre of an acrimonious dispute over the proposed sale of its 1225 copy of the Magna Carta. Merchant banker Mark Treasure is invited down to sort out the squabbling cathedral chapter. But before he has been there a day a fire destroys the ecclesiastical library - Magna Carta and all - and a body is discovered in the debris.

But it wasn't fire that killed the Dean's verger. And as Treasure's murder investigation unravels evidence of some most unholy mayhem and dark skulduggery, he realises that Litchester is a place where sins and secrets abound . . . 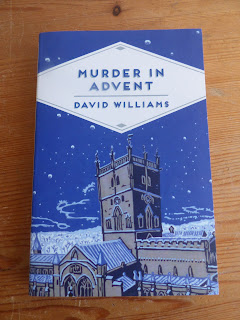 Yesterday was another dull, grey day with snow, sleet and more rain. I had to deliver something to youngest daughter and just kept running into floods whichever road I took. 4 times I had to turn round and find another route - good job I know the roads over there in Suffolk Coastal. I came home by a longer route on an 'A' road but once again came to a long stretch of flooded road. I stopped to try to think of another way round and then a small car like mine risked coming through from the other way, So after they'd passed I took a chance and got through. An idiot in a 4x4 started coming the other way as I was three quarters through - I though road etiquette was to wait and go through floods one at a time. I gave him a black look as we passed!.......but I doubt he even noticed.

First card and present arrived in the post yesterday. Thank you to my penfriend W, you even beat my cousin to first card of the season, first time she's been beat forever! 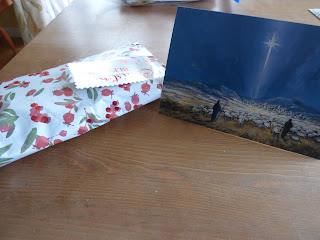 Feeling guilty that I'd not even started on card writing I fished them all out of the Christmas drawer and got them as far as the table downstairs.  Next I will write them..............sometime - I can't get up any enthusiasm for Christmas jobs this year.

Posted by Sue in Suffolk at 07:00
Email ThisBlogThis!Share to TwitterShare to FacebookShare to Pinterest
Labels: Advent Photos 2020