Today's Christmas book  is a collection of 10 short stories ranging from those written many years ago - to the more recent - including one weird one by Val McDermid. Not sure where or when I acquired this but there it was on my shelf.....waiting. 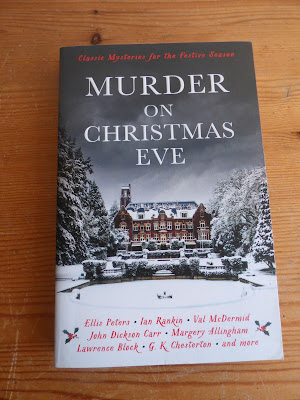 "Christmas Eve. While the world sleeps, snow falls gently from the sky, presents lie under the tree ... and murder is afoot. In this collection of ten classic murder mysteries by the best crime writers from the 1920s to today, death and mayhem take many festive forms, from the inventive to the unexpected.

From a Santa Claus with a grudge to a cat who knows who killed its owner on Christmas Eve, these are stories to enjoy - and be mystified by - in front of a roaring fire, mince pie in hand."

This collection was put together and published in 2017. I read and enjoyed  it at the end of November and will be back tomorrow with giveaway info on the 4 crime books mentioned so far. They are packed ready. Just need names and addresses.

Yesterday the sun shone at last which was good to see. I took a bag of things to the charity shop in Eye but they aren't taking anything for a week or two so had to take them home again.  Thought I'd better get going on the Christmas cards so  bought some Christmas stamps while I was out .
In the afternoon did all the easy cards (cousins) where I just say "Happy Christmas +" Hope you are well"+ "I'm moving again so new address in the New Year".........We've never been a good family for keeping in close touch but tend to catch up at funerals!
I do write a bit more in some cards and some friends even get letters.
Back Tomorrow
Sue
Posted by Sue in Suffolk at 07:00
Email ThisBlogThis!Share to TwitterShare to FacebookShare to Pinterest
Labels: Advent Photos 2020