A little Christmas book  first published in  1987  by the author of many fiction, non fiction and children's books. 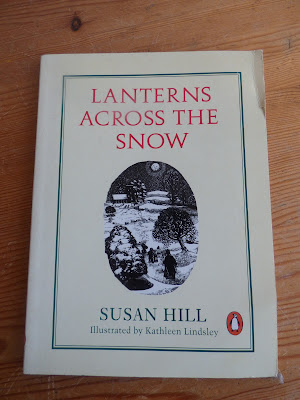 An account of a country childhood in Wessex a hundred years ago. Evoking the delights and surprises of Christmas and the mood of the countryside in the bleak mid-winter, this is a nostalgic and lyrical story.

A quick and gentle read about a little girl sharing Christmas with her brother, mother and her Vicar father in Victorian England.

The tree people came yesterday and took down the big Ash tree at the end of the garden. It was starting to get Ash Tree die-back although it probably would have been OK for a while longer. 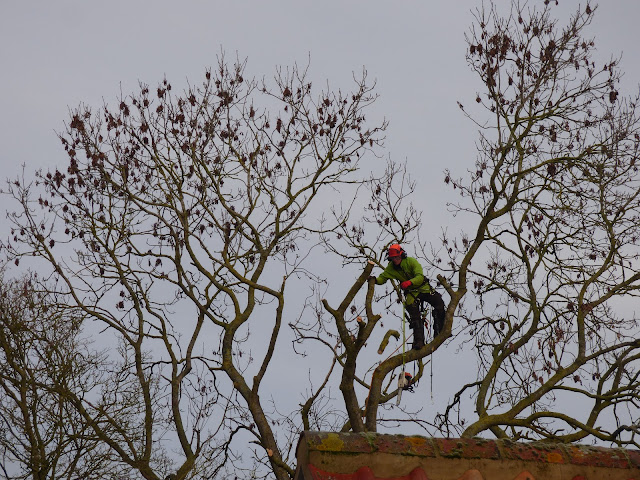 How do they do it? Moving about up there as easily as the rest of us move around on the ground.

Much safer now for new owners and next door neighbours' hot tub and new extension and BiL will come over sometime and collect all the decent wood for his wood-burner. They chipped all the smaller stuff and tidied up after them. That's the last time I'll have to worry about trees!

It was so good to get back to swimming yesterday and only 3 people in my 'slow' half. But I was really surprised at my lack of stamina after just 4 weeks, I felt tireder than when the pool reopened in July. I suppose in the spring and summer there was more gardening to do whereas through November exercise has been almost non-existent.
I heard a man telling someone that the Lido at Beccles (the only open-air pool in Suffolk) is still open but isn't being heated. Brrrrrrrr! Must be this sudden craze of everybody wanting to do cold water outdoor swimming. When I say everybody, that doesn't include me!
Back Tomorrow
Sue
Posted by Sue in Suffolk at 07:00
Email ThisBlogThis!Share to TwitterShare to FacebookShare to Pinterest
Labels: Advent Photos 2020