When our eldest daughter went to uni we said she was the first in the family to get there but only in our small bit of the family, because this was another photo I came across while looking through the shoe box of photos. 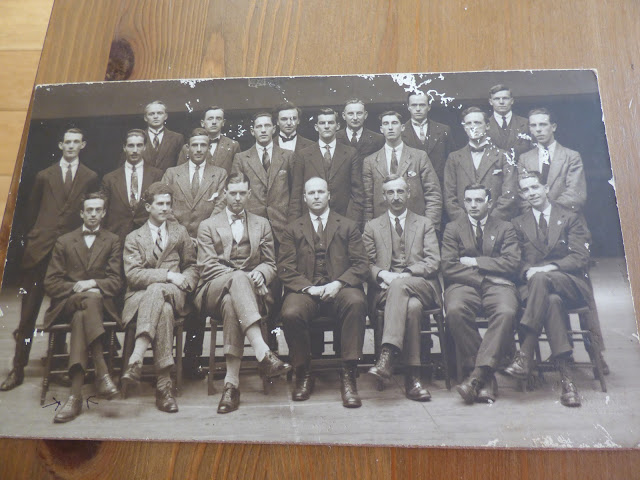 On the back it says "Uncle Victor at Oxford". I'm guessing taken in the early 1920s. Thanks to the  arrows by his feet I know Uncle Victor is the one sitting far left. I have no idea which college he was at or what he studied . If I'm right Victor Cone was the brother of my grandmother on my Dad's side of the family. From the spidery writing in our old Family Bible I know he married in 1925 and died in Bromley in Kent. I vaguely remember some of my Dad's Aunts and Uncles but not Victor so maybe he didn't live in Suffolk.

What struck me most was the difference in neck-ware, some have the modern turned down collar and tie, some like Victor have a jaunty bow-tie and some still have the upright collar that seems to hark back to Victorian times.  I wonder what became of these Bright Young Men.Were they too young for the Great War? Did they survive WWII? Perhaps somewhere there are other families with this same photograph among there family heirlooms.

Back Very Soon
Sue
Posted by Sue in Suffolk at 06:30
Email ThisBlogThis!Share to TwitterShare to FacebookShare to Pinterest
Labels: Family