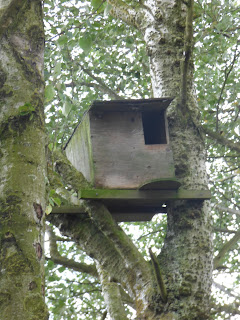 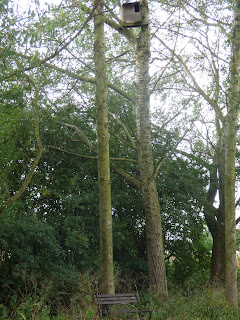 was fixed there by the previous owners for owls but then someone told them it was too high and Mrs F said only Kestrels had nested in it, although she did say that a Barn Owl roosted in the wood shed sometimes.
We've seen Barn Owls a couple of times swooping round the field in the evening and then Col saw two perched atop the bonfire heap. Walking down our meadow one evening last week we actually saw them coming out of the box. So we've taken to creeping down the meadow at dusk and watching them coming and going, well going mainly as however quietly we creep they still hear us coming! No picture I'm afraid - they are far too quick for that.

Col has now sorted out  three more boxes that were laying in the workshop needing repair and we put them up in different places round about.
This could be a bat box 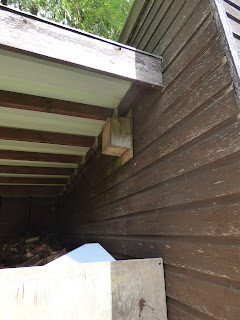 And this one below is Coronation Street for sparrows or something? 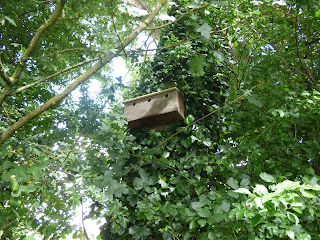 This one below just needed a new roof, and is suitable for Robins, we've got a baby Robin visiting the bird feeders so they are already nesting somewhere around 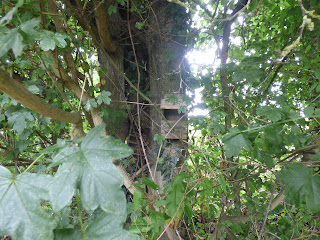 But Barn Owls are special.

And the book?
New Boy by Tracy Chevalier - a re-telling of Shakespeares Othello.
A very short book - I read it in a few hours - but it's very powerful. Osei is from Ghana and arrives at a Washington elementary school when his diplomat Father is posted there. Everyone else in the school is white and over one day jealousy, bullying, betrayal and racism changes the lives of four 11year olds for ever........and of course Shakespeare's Othello is a tragedy.

Thanks for comments on Saturday's library book photo.