As well as the cherry plum tree we found growing in the hedge boundary at the bottom of the garden we also have a couple of old smallish damson type plum trees on the other boundary. One had several fruit on it, and some had already been eaten by birds, so a week ago while I held the ladder  Col climbed up and picked all the fruit he could reach. 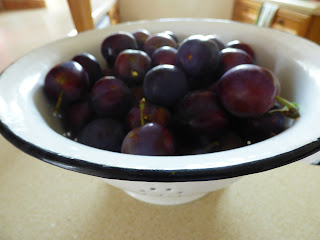 It was just a couple of lb and made 2 jars of lovely coloured jam, which set well, rather TOO well. There was a little bit that wouldn't fit in the jars and Col had it in a sandwich - he said it was rather solid - whoops!
Better than too runny I guess.

A couple of weeks ago I made two batches of Marrow and Ginger Jam using two courgettes that had turned into marrows overnight! This used up over half a jar of crystallized stem  ginger  in syrup that had travelled from the smallholding to Ipswich and from Ipswich to here. Marrow and ginger jam is the other extreme and doesn't set well so needs using up quickly.

Yesterday I used the last of the jar of stem ginger to make Orange and Ginger Marmalade - using a tin of the ready prepared oranges. It's delicious and has completely changed the canned Mamade into something much more interesting and something else for our sisters hampers. 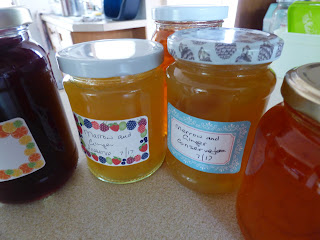 Thanks for all the comments.For the moment  I've set comments so that I see them first before publishing as there were multiple silly junk ones popping up everyday.

Back Shortly
Sue
Posted by Sue in Suffolk at 06:00
Email ThisBlogThis!Share to TwitterShare to FacebookShare to Pinterest
Labels: Christmas Hamper Gifts, House and Home, Marmalade, Plums, The Garden