Reading My Own Books and Other Stuff

I'm getting through books at a great rate at the moment, there's nothing on TV in the evenings so I've had my nose in a book for hours, and ran out of library books 2 weeks before the van is round again but not a problem with all the books I own! 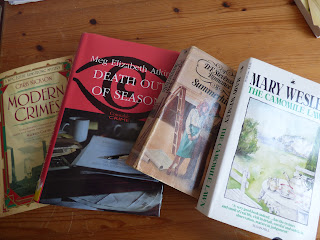 Here are four off my shelves
Left to right................. Chris Nickson - Modern Crimes. This man turns out lots of historical crime fiction and this is the first in a series set in 1924 about one of the first women PC's in Leeds. (Most of his books are set in Leeds). It was OK, not outstanding. The second in the series is due out next month but jumps forward 20 years to 1944.
Meg Elizabeth Atkins..........Death out of Season. Picked up off the library For Sale shelf ages ago,this is an ex-library book by an author I've never heard of. There are  couple of her other books in Large Print in the library stock and I've reserved them as it was a reasonably good read.
I've enjoyed several of D.E Stevenson's books in the past but this one......Summerhills...... is dreadful. I didn't finish it............ It's tacky 1970's cover doesn't help.
Much better than all the others was Mary Wesley's book The Camomile Lawn. It's been reprinted many times since it was first published in 1984  and made for TV too. The Library summary says.....................
'The Camomile Lawn' presents a vivid and lively picture of wartime London and Cornwall as seen through the eyes of five cousins.
I really enjoyed this and will look out for more of her books from the library.

And the Other Stuff

Our bird-feeders  are busy even though there are plenty of berries and seed-heads about. Col glanced out and said - 4 Long Tailed Tits - then a few seconds later after I picked up the camera there were even more 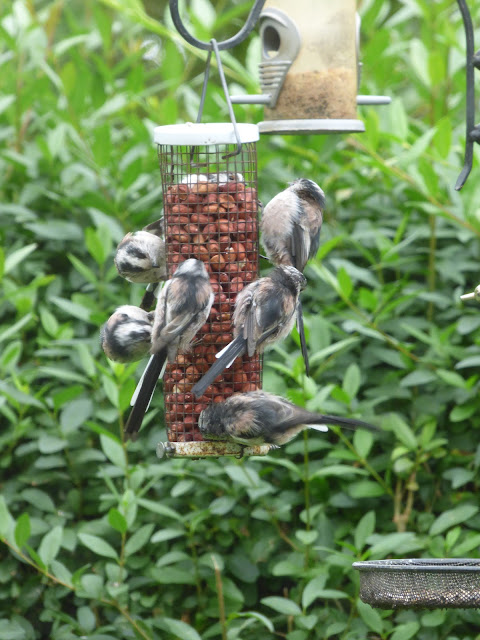 We had the garage doors repaired yesterday, another thing we didn't know needed doing until we got here. They are up and over doors but wouldn't stay up which could be a problem! Now we'll be able to put the cars - or at least one of them away through the winter and both if we re-organise other things.

Thank you for all the comments about flowers for cutting. Sarah suggested Bells of Ireland which was a new one to me - so I looked them up and Sarah Raven (expert on cut flowers) rates them so the seeds will go on my list. Although I don't want too many annuals. There are loads of paving slabs all over the place here so we've used 3 small ones to make a mini path to the centre of the bed to make it easier for weeding and picking.


Posted by Sue in Suffolk at 06:00
Email ThisBlogThis!Share to TwitterShare to FacebookShare to Pinterest
Labels: My Books, Natural world