Last week Colin, his brother and sister were in town sorting solicitor regarding his Dad's will so I popped into a couple of charity shops and found these. Couldn't believe my eyes...a Persephone Book that I hadn't got and just £1, I think I was so excited at all the books being £1 that I got carried away and bought Corpus which I've already read but it was so good I want to re-read before he does the next in the series and Elizabeth Luard - A Cook's Year in a Welsh Farmhouse and I have a feeling I've had that from the library years ago. I now pick up any cheap preserving jars as they are so expensive new and these two little ones were 99p each. 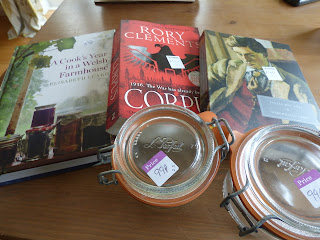 At home I looked through the Welsh Farmhouse cookery book and yes, I had seen it before but I've found a new home for it as another  blogger mentioned they we looking out for a copy. The jars are already in use holding the home grown chili peppers that were dried in the dehydrator - they'll be presents for the hampers. The Persephone book (It was Marghanita Laski -Little Boy Lost) has joined the others on their special shelf and, before I re-read it, Corpus will probably be loaned to a friend who reads much the same as I do.

Thank you for plum comments yesterday, haven't had a chance to try out the new sheltered area yet - we had sunshine and showers all day yesterday and very, very windy.