..................not so long ago............ I wrote a diary page for the Suffolk Smallholders Society monthly newsletter. I came across some of the pieces I'd written when a folder fell off the shelf and emptied it's contents all over the craft room floor.

July was the month we held the Suffolk Smallholders Annual Show - I think the last one was in 2006 as the new committee after that year felt it too much effort to organise. 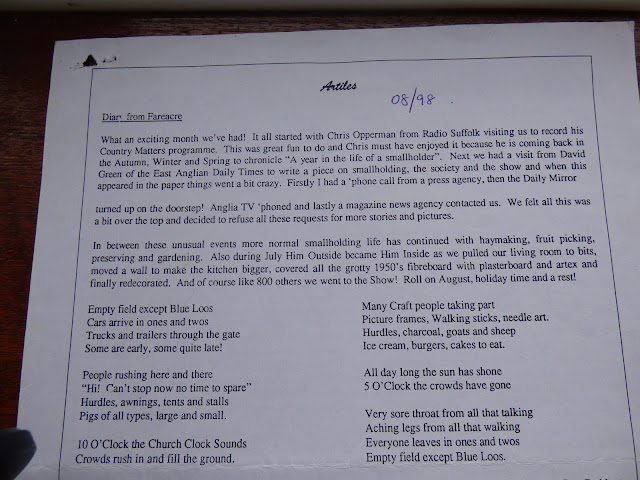 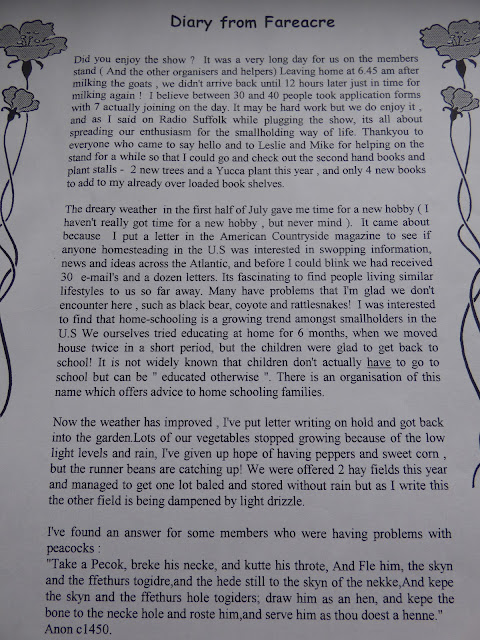 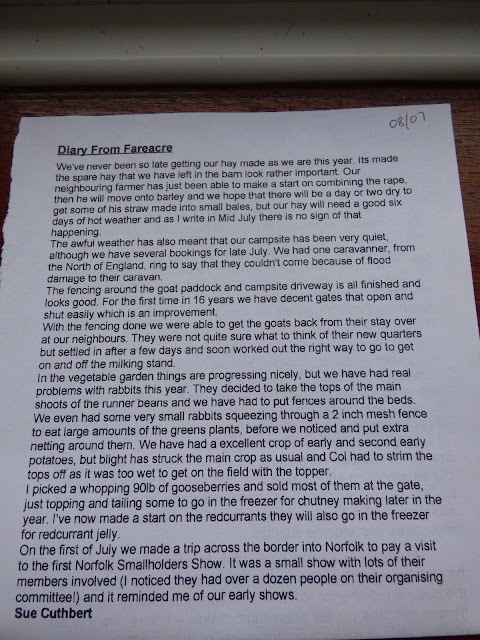 
Diary From Fareacre August 2012
We have been watching with interest (being nosy!) all the comings and goings up a track across the field near our home. Little Moor Farm is up for sale for the first time in over 40 years and any of the people we've seen going to look around could be our new neighbours. Although whoever takes it on will need to have very deep pockets as it's Grade II Listed, timber framed and needs a lot of work done to modernise it. Standing in over 6 acres, 5 of which are completely overgrown, 1/4 mile from the road, it looks like a dream home but will be a huge job for anyone to tackle. Our guess is that it will become a second home just as all the other smallholdings that have come up for sale in the area recently. We count ourselves as being very lucky to have found Fareacre in its affordable run-down condition 20 years ago before prices shot up.
Watching the weather forecast is our other main preoccupation because of the two words "Hay making". If we don't get a week of good forecasts before the end of August no hay will be made this year, something that's never happened before. The most annoying thing is that our weather here has consistently been better than the forecast and we probably could have got the hay done at the end of June if only we had dis-regarded all we heard on TV and radio.
There is one crop in the garden that has really benefited from all the rain and that is our new raspberry bed. In 2011 we decided to take out all the very old blackcurrant bushes as they had been given a smaller and smaller amount each year and replaced them with Tadmor, a new variety of Summer fruiting raspberry. In theory these should be later than our July fruiting canes but earlier than the Autumn Raspberries. I find raspberries a very easy crop to grow but only learned that you have to be very strict in digging out the runners after several years of growing them. Our first raspberry bed was allowed to "walk" across the fruit cage and soon wore itself out. Now I ruthlessly dig out anything growing out-side of the row and take the tops off all canes at about 5 foot 6 inches tall. Given a good mulch of compost each Autumn after the old fruiting canes have been cut out, they have been successful now for many years.
On August 5th we will be packing our passports and crossing the border into Norfolk to take our secondhand smallholding books to the Norfolk Smallholders show at Holt. I hope the day is fine and dry as we have a very old gazebo which I fear may not stand up to some of the storms that have made up the summer so far.

Looking back isn't as sad as I imagined. We worked so hard back then I'm glad we've retired!

Back Soon
Sue
Posted by Sue in Suffolk at 06:30
Email ThisBlogThis!Share to TwitterShare to FacebookShare to Pinterest
Labels: Memories