December 14th and The Free Lunch

Who said there is no such thing as a free lunch?

There is in our village. It's all because of something called The Townlands Trust Charity. The Trust - dating back to the 1800's once owned 5 tenements, which were almshouses, and more than 75 acres, the houses were sold off  30 years ago but the land is still rented out - once to households for allotments but now to farmers, they actually owned our bit of meadow until it was sold off in the 1980s. A long time ago they gave "2 penny loaves weekly to the poor" but now it's a free Christmas lunch to over 60's as well as a donation to the church and the school.

When something says "free"  I'm there like a shot even though I thought I wouldn't know anybody. But when I rang up to book a place the lady told me that Mrs F - who lived in our cottage before us - would be going so at least I would know her.

The meal was last Monday at a large pub on the A140, just a few miles up the road from home ........ it was a  snowy and icy day. Avoiding the busy main road I drove there "the back way" so I could go slowly through the slush.

The food was delicious,  I had chosen a veggie option of filo-pastry parcel filled with leeks, nuts and mushrooms in a mushroom sauce served on a bed of rocket and with roast potatoes. For desert a chocolate brownie with ice cream. Then there was coffee and a mini mince pie. On arrival we found a bag of chocolate coins on the table for everyone and a raffle ticket each.
My ticket was actually drawn out - mainly because there were enough gifts for everyone! and I picked this 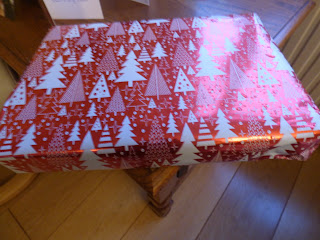 No idea what's in it, I shall save it until Christmas day, but I'm hoping  from the shape that it's edible😊.


Thank you to everyone for comments. I'll do a hospital update soon.

My £12 Christmas treat money has so far bought some Pringles for £1.25, another box of the Nescafe Salted Caramel coffee sachets for £1.50, some Port Salut cheese for £2 and I wanted Jacobs Cornish Wafer biscuits but Asda in Stowmarket didn't have any, so there is still cash left for next shopping trip. I'm quite cheap to keep at Christmas!

Posted by Sue in Suffolk at 06:00
Email ThisBlogThis!Share to TwitterShare to FacebookShare to Pinterest
Labels: Advent Photos 2017, Christmas, Local Events