December 5th and the Best Ever Bargain

This has just got to be the car-boot bargain of the Century. 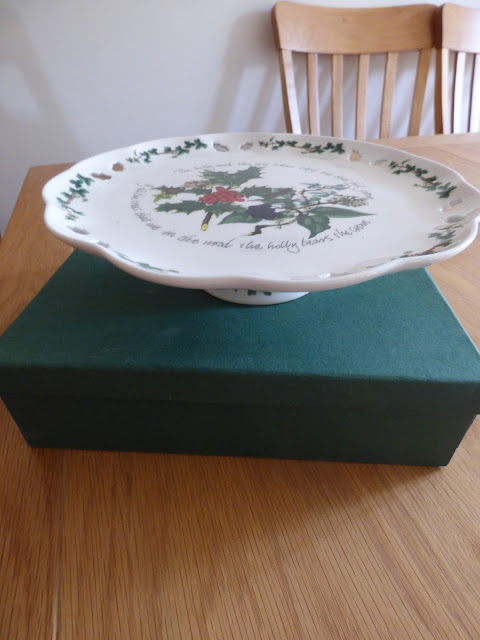 It's a Portmeirion  Holly and Ivy  footed Christmas cake stand which I got from the local small car boot sale in September for £2.........complete with storage box...... Honestly - Just £2. It was a man selling a whole load of house clearance stuff and when he said £2 I didn't hesitate but must have looked astonished because he said "If I'd have said £20 you wouldn't have wanted it would you?". I said no definitely not as it's not something I really need. I didn't tell him that I might have paid £5 or maybe even £10, as it's something I've seen in Wyevale Garden Centre at Christmas and they sell there for around the £35 mark!

It will stand in the middle of the dining table for the next few weeks so I can enjoy it, although the Christmas cake probably won't go on it until January when we have a family get together.

I had to rush around the other day  and get Christmas cards done for the Ipswich relatives so I can put them into a Ipswich Scout Post Box next time I go shopping, it's only a few days until their last posting date. I wrote about Scout Post last year and looked online to see where they have collection boxes this year. Seems they are EVERYWHERE!  They've even expanded into Felixstowe now as well. Must be a really good fundraiser - it is 25p to post a card in their boxes -back in the day when I was an Akela we just had a Christmas Jumble Sale/Bazaar, which was a very popular event.

Thank you for comments about Debenham, I really need to go there more often to check out the 10p bargains of out of date tins and packets at the Co-op. It was on Radio 4 news yesterday about East of England Co-op's doing this to help stop food waste. You heard it HERE a few weeks ago!

Back Tomorrow
Sue
Posted by Sue in Suffolk at 06:00
Email ThisBlogThis!Share to TwitterShare to FacebookShare to Pinterest
Labels: Advent Photos 2017, Christmas, Portmeirion Holly and Ivy Ware