December 7th and The Christmas Cake

The recipe I use is a Mary Berry recipe from her previous incarnation ( Before Great British Bake Off) when she was writing for magazines as a Freezer Expert. 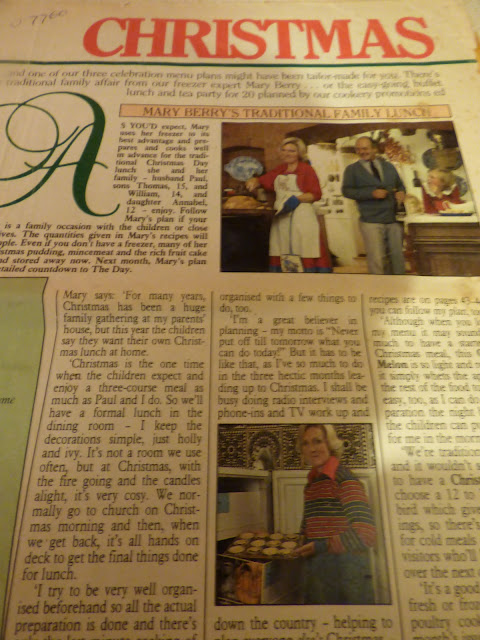 The pages were torn from a Very Old Family Circle magazine from about 1984.  There's a picture of MB and her 3  children aged 15,14 and 12. When I was trying to work out the date of the magazine  I found online that one of her children died in a car accident when he was only 19 - how very sad.


I asked Col a couple of weeks ago if I should  bother with a Christmas Cake this year with him in hospital, and he reminded me that I could always take some into hospital for him to eat with an apple and a chunk of cheese - just how we like it for teatime on the days after Christmas
So the fruit was soaked in cold tea for 3 days and then I mixed it all up and baked. I made 1 ½ times the recipe this year to do 1 large and two mini cakes but then looked for the mini cake tins. Searched every cupboard twice then once more and can't find them anywhere. Surely I didn't take them to the car boot sale thinking I hadn't got room for them anymore? I'm almost positive that I didn't, so where the heck are they, I haven't got that many places they can be.
Anyway instead of one large and 2 mini, I made 1 medium and 1 small. One will be kept for January. I've bought icing and marzipan so will get that done nearer to Christmas after I've fed the cakes with a bit of Brandy.

I've got notes on the top of the recipe of the quantity I've made over the past few years and what sized cakes are made from the amounts used. 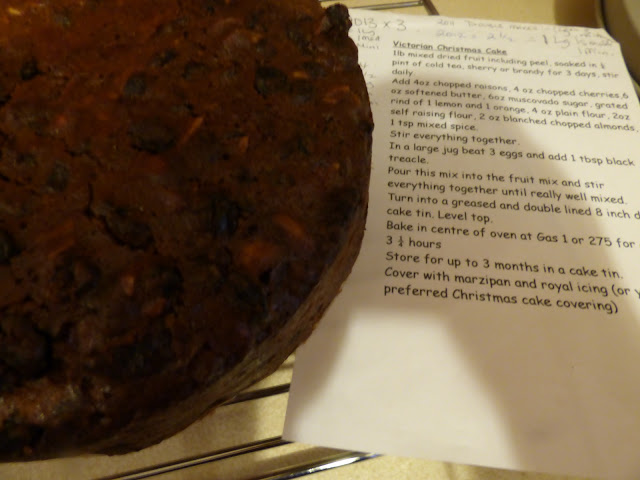 The recipe is on the separate recipe page if you need it but I expect everyone has a favourite cake recipe already.

Thank you to an anonymous comment for putting me right on the spelling of mantel-piece. All these years I've assumed that as a MANTLE was a cloak that went over clothes then it must be MANTLE-piece going over the fire place, but NO, it should be MANTEL-piece. Well, you learn something new everyday.......and spell checker never told me I was wrong either!

Thank you to people who've left comments on old posts, I often forget to look back. The update from Addenbrookes is that Col has been having various chemo stuff since last Friday and isn't feeling too bad so far though tired from lack of sleep due to hospitals being such noisy places at night. He is in a room on his own but it still seems noisy out in the corridor and in the ward kitchen opposite his room. Years and years ago when I read hospital romances(! Heavens knows why?) I'm sure the nurses used to dim the lights and whisper at night.........

A comment from a Sarah asked if it was another superfluous and unnecessary  trend from The States to have  china tableware for use only at Christmas? (or in the fall)  I'm not sure but I know that my mum had a set of Colclough Ivy Leaf china that was only used for visitors and at Christmas and that was back in the 1960's. I don't know how long Portmeirion have been doing their Holly and Ivy ware, but quite a number of years?
Luckily Sarah has a set of Wedgewood White Country Ware china from the 1980's to use, but  I now have a totally unnecessary yearning for the Holly and Ivy Butter knives............no idea why as I've never  before in my life owned a butter knife!

Posted by Sue in Suffolk at 06:00
Email ThisBlogThis!Share to TwitterShare to FacebookShare to Pinterest
Labels: Advent Photos 2017, Christmas