Yesterday being the Solstice it was the day for bringing in some greenery. 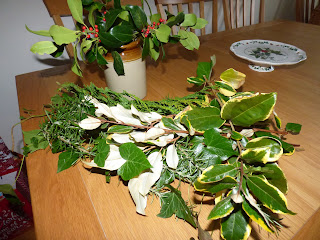 From the garden I collected some bits of Rosemary, Elaeagnus, Ivy, a few pieces from the Leylandii and just one little piece of Bay from the plant that moved in a pot from the smallholding to here via Ipswich. It's been planted out now but needs a few more years to get going so I didn't want to take too much from it.
The holly - with berries - came from a lovely big tree about a mile away, I spotted it a few weeks ago and because we live on little used back roads it was still there when I went to bring a little home.
We've planted some holly in the mini-wood so one day there will be some to bring in from right here, although holly is so slow growing it might be the next person to live here who benefits.

A vase of greenery at each end of the living room and ivy on the mantel-piece. I'm Decked!

Now, on the subject of Holly and Ivy........... here's a thing.......a pretty thing and a happy surprise find. I had to go shopping at Aldi, so of course popped into the Hospice charity shop just over the road, where they always have a table of Christmas things and what did I spot, YES it's another bit of Holly and Ivy Portmeirion, a small footed bowl, priced up at £4.50 but Great Joy, they had a "Everything Half Price" notice on the table. Happy Dance........ 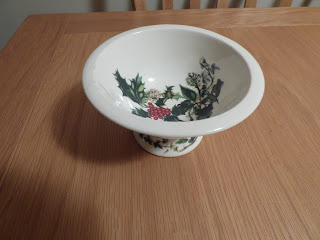 And Finally ........here is some news I wasn't expecting to say..........Colin is home! Much to our surprise they decided his blood counts were good enough to let him out a week earlier than we thought and I went and collected him yesterday afternoon. We have to go to Addenbrookes twice a week for blood tests where they check and re-adjust tablets and recovery will probably be up and down but at least he'll get a good nights sleep here. In a few weeks time he will have a bone marrow sample taken and that's when they'll be able to judge how well the donor stem cells have worked.
Having him home but still needing to rest and keep away from people with colds has quite thrown Christmas plans up in the air......... but in a good way.😊