December 2nd and the Advent Calendar

We didn't have an Advent Calendar last year, no-where to put one in the tiny bungalow. Then I thought I still had the one saved from 2015, maybe I'd put it inside the big family bible to press the little doors shut?
When we got round to unpacking all the books the lovely National Trust Advent calendar wasn't inside the bible. No sign of it anywhere so I looked around online for an Advent Calendar that would be good to look at all month and it needed to stand up on it's own too and definitely no chocolate. 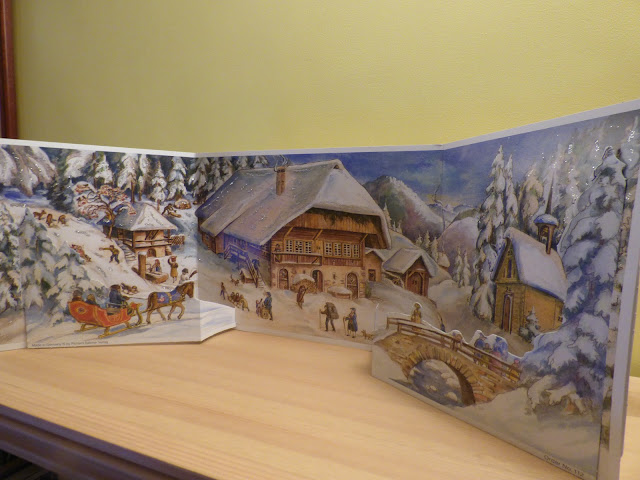 I shall enjoy seeing what sort of things are behind the doors.....A family around a table in door 1.

Col is now in Addenbrookes Hospital being prepared for the donor stem cell transplant. This involves a week of  a type of chemo, which we hope isn't one he had before that resulted in him going into shock!
The stem cell donor has a week of injections which forces stem cells to overflow into the blood, then they have a day donating and Col gets them back the next day and that's when the problems might start. He will be in all month as recovery takes several weeks.....I'm Home Alone for December!
In a way it will be easier this time as he's been through it all before but on the other hand because he's been so well and will then  be very ill it will be harder ........if you follow. He is going into this transplant in a much better state of heath than last time, heavier and fitter.......we shall just have to wait and see. We've been warned that recovery is peaks and troughs rather than a steady climb.

The only internet connection in the ward is via the over-the-bed TV and very slow, apparently when they modernised all the hospital computer systems, good internet connection up high - 10th floor- on this ward was lost. He tried a dongle but no good either, he has plenty of reading matter and the TV and Radio to keep him occupied as I won't be going to see him more than a couple of times a week........ it's just too far and despite all the practice I still don't enjoy driving - especially on the A14 which has as much traffic as a motorway but is only 2 lanes most of the way, with numerous junctions and trucks  pulling out of lay-bys etc. Luckily Col understands how I feel, and we'll cope how we have before.