December 20th and the Jigsaw puzzle

Way back in April at a charity shop somewhere I found a jigsaw to do over Christmas. 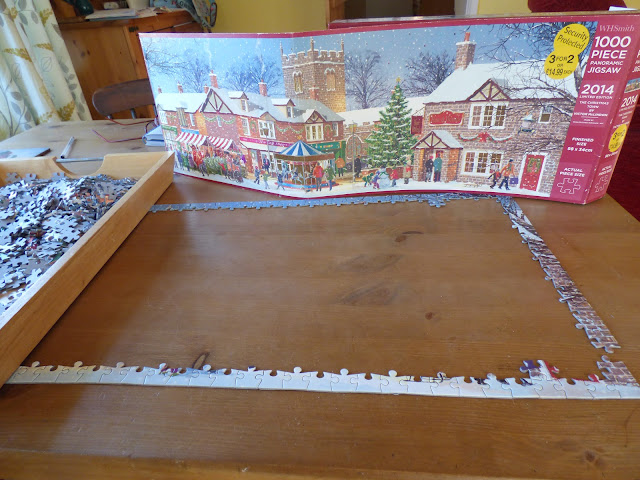 For the life of me I can't remember where I got it from but my accounts say I paid £1.

Got it out to make a start and immediately hit a problem, it's long and thin, panoramic and won't fit on the bit of board I have for jigsaws.
So Plan B, the table in the living room which we eat at when we are not feeling posh enough for the dining room....... that is all the time when we don't have visitors.
Then I hit another problem - it's a blinkin' difficult puzzle - took me an age to even get the edges sorted and the perennial problem with second-hand jigsaws.........are there any bits missing?
I'll let you know........probably next year.........or I might just  give up in a huff!

Update from Addenbrookes........ When I went up to see Col on Sunday I said how good it was that he hadn't lost any hair after the chemo, in 2016 it went quite quickly. I spoke too soon because yesterday I had to use the clippers to take all the remaining hair off his head to save any more hairy pillows!   He is beginning to feel better, his mouth is less sore and he's eating a little. The blood counts are looking better too so hopefully onward and upward, and our son got the dongle working so he's connected to the world again. He has had one or two small temperature spikes but no trace of infection.......thank heavens - infections caused so many problems when he was in Ipswich.

And the A14 update - not too bad yesterday, busy but moving well but it's a pity everyday isn't like Sunday morning, I think I only saw 4 trucks all the way there. Yesterdays' delays on getting home were caused by the traffic lights at the hospital bus station getting stuck on red and about 6 buses had to back up and shuffle about to get out a different way.

Back Tomorrow
Sue
Posted by Sue in Suffolk at 06:00
Email ThisBlogThis!Share to TwitterShare to FacebookShare to Pinterest
Labels: Advent Photos 2017, Jigsaw Puzzles