Weeks and weeks ago when I mentioned the finding of a Persephone book in a charity shop  to add to my collection, someone asked for more information about this publishing company and why I collect the books.

Persephone started to reprint books by forgotten authors, mostly female, in 1999. They only publish five each year  with their special grey covers making them look rather exclusive (and easier to spot in secondhand book shops!). 128 published so far.

I have a shelf of their titles and also have some of the books they've reprinted but in the original publications. For instance "Few Eggs and No Oranges" by Vere Hodgson, a wartime diary which I had in its original covers long before I knew about Persephone. 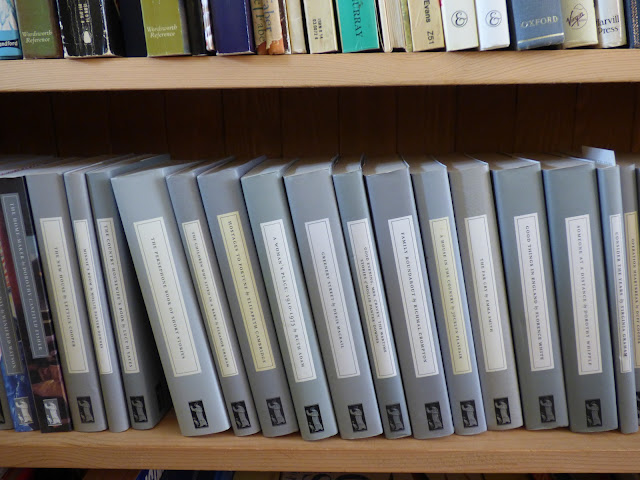 They also publish their most popular titles in a cheaper edition with picture covers  - the two on the left are ones I have.

Each grey book has  front and end papers featuring a material pattern from the era of the original date of the book and every book also comes with a matching bookmark. 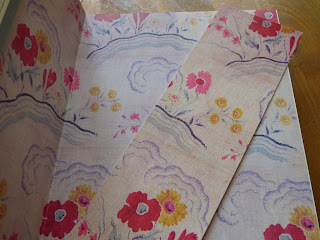 In 2013 they printed a catalogue with a full page of information about each book, but they've said they can't do that again as it was very expensive to produce. 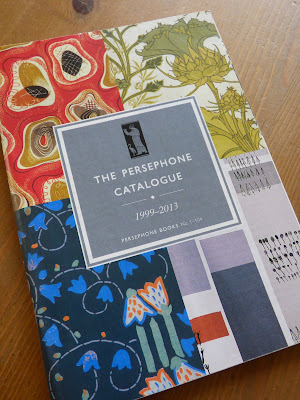 The Persephone Biannually, is like a small magazine and has a short story, details of forthcoming titles and reviews of previous titles plus news of the events they have in their shop in Lambs Conduit Street in London.

Most of the books I possess have been found second-hand although a very kind blogger and blog reader who was downsizing a couple of years ago sent me  and some other people  3 or 4, which was handy and very kind. I've been able to pass some onto a friend when I've found duplicates and was given one to review on the blog by the publishers in 2016.

There are many that I know I would never read so have no intention of collecting all 128! especially as they are now £13 each when new. My favourites apart from "Few Eggs" are the other books from wartime  by- Mollie Panter-Downes " Good Evening Mrs Craven" and "Minnie's Room". Also by the same author " London War Notes" which I found on amazon the year before Persephone re-printed so that isn't in the matching grey cover either.

All that doesn't really answer why I collect them or why I also have a collection of WWII Home Front books ( some still to read) almost all of Angela Thirkell's novels of Barsetshire.( haven't read all these yet either). All the Miss Read books ( I've read all these twice). The whole set of ABC crimes by Sue Grafton ( Except Y and Z - she died before doing Z ) ( I'm up to L!). The set of Elizabethan Mysteries by Edward Marston (still some to read of this series too) and his Medieval Mystery series ( all waiting to be read) as well as a collections of books about folklore, countryside  and "quite a few" other books.

Back in February 2015 on the old blog, when we were at the smallholding I took photos of all our books, we had 1,482 but some went before we left the smallholding and  a lot more went when we moved here to the cottage. I'm still sorting, sifting and selling......... another £13 worth went off to Ziffit this week. So a lot less than a thousand now but I'm still looking for Persephone books and old golden age crime that I haven't read - I found 5 Dorothy L Sayers at the Debenham Yard sales last weekend, so a few books still coming in too.


Not sure what I'm doing yet to fill this weekend, one thing for definite plus  a car boot sale probably. Maybe a church visit and I suppose I'd better do the ironing.

I was pondering why weekends are the hardest to cope with and I think it's because I spent most of our married life looking forward to Col being at home at the weekend so we could work together on the smallholding.
I mustn't dwell on that thought.


Have a lovely weekend folks
Back Monday
Sue

Posted by Sue in Suffolk at 06:00
Email ThisBlogThis!Share to TwitterShare to FacebookShare to Pinterest
Labels: My Books, Persephone Books