These are two of the July  pages from the Country Diary of an Edwardian Lady. Note the Bee-Orchid on the left hand page........just like the one I found in the cut-flower garden. 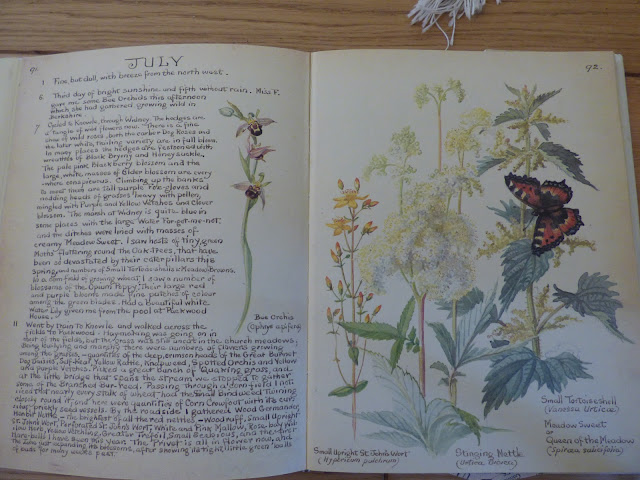 July is named in honour of Julius Caesar, July usually contains some good hot days and these are sometimes referred to as Dog Days. At this time of year Sirius, the dog star, rises at the same time as the sun and was thought by the ancient Romans to give the sun extra heat.

Gillyflower is an old name that seems to have been given to a whole group of fragrant flowers in the 14th-16th centuries. One definition says that the name means 'July flowers', derived from the French, juillet , (jillyflowers) This would make sense as French was the language of the Royal Court and was widely spoken. As time passed the name was used for mainly just for Pinks, forerunners of Carnations and the 'clove gillyflower' was Dianthus caryophyllus.

Another lovely page of illustrations, this time  from the Illustrated Country Year by Celia Lewin. This highlights the importance of stinging nettles for butterflies. 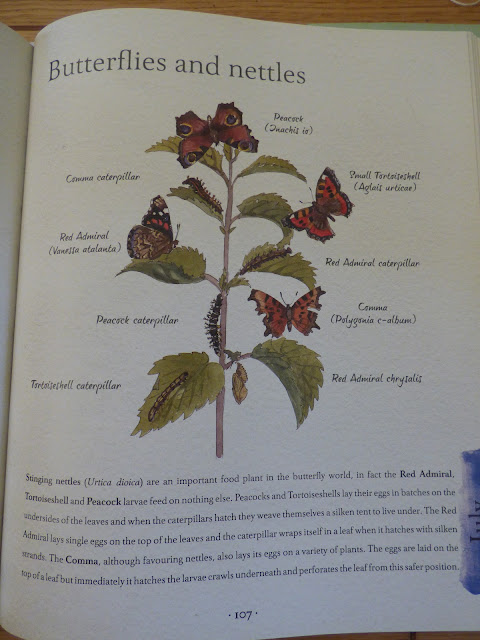 July 15th is St Swithin's Day and everyone knows about the weather on that day being the same for the next 40 days......supposedly!

There was also a belief about the ripening of apples. It was thought that if it rained on the 15th the Saint was christening the apples and there would be a good harvest. In many areas no one would eat an apple before this day but after the 15th windfall apples could be used for jam making.

There is a total lunar eclipse on the 27th between 8.45pm and 9.30pm. A lunar eclipse occurs when the earth is between the moon and the sun, casting a shadow across the moon. Full lunar eclipses are sometimes called 'blood-moons' because the moon takes on shades of red and orange.

Many thanks for comments on Saturday, I will answer the questions on tomorrows post - promise.