Shall I bother to keep going to the local car-boot sale?

So many vases, mugs by the hundred, enough toys for several dozen children plus Things, Junk and Tat!

But it fills an hour or so on a Sunday morning and one day there might be treasure.

Last Sunday there were no children's  Christmas books or books by Shirley Hughes or pretty jugs so I came home with 1 book for the grandchildren - 50p, A shoe box with lots of farm and zoo animals  for £3 and 3 paper punches which I may or may not use for card making  at 50p each. 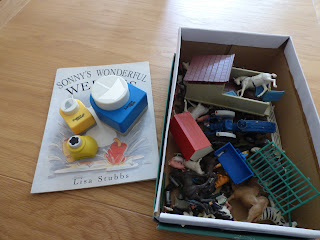 So what have I been up to since Sunday

Tuesday -
A bit of baking before the weather got hot and more beetroot cooked. Washing dry on the line in an hour.

Cheques donated in memory of Colin arrived from the Funeral Directors. Thank you to everyone who donated to Lyphoma Action and SomershamWard Support Group. A Grand total of £476 was divided between the two and I've sent them off to both charities and sorted out an acknowledgement note for the newspaper.

Someone has backed into the house name sign and broken it. It was a clay plaque and made by the sister of the lady who was here before us. Colin had mounted it on a wooden board and fixed it up on the other side of the lane opposite the house. 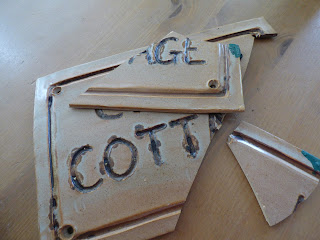 We did wonder how long it would last as any big van backing out of next doors driveway could bump into it and that's probably what happened. I've taken the broken bits off the board and will stencil the house name in black paint and then when/if we get rain to soften the soil I'll bang it back in the ground by the front hedge where nothing can hit it.

Wednesday-
I did what I said about the house sign, actually found the black paint without turning the whole workshop upside down. The sign looks OK. Propped it up out the front until the ground is soft enough to bang it in the ground.
How the heck I'm going to sort out the workshop I don't know. I couldn't stop Col keeping all the things that "might come in handy" and I couldn't stop him bringing a ton of tools from the smallholding. Over winter I shall have to make a start. Most of the stuff will have to go off to the auction yard I reckon.
Off to the pool for swimming (the over 50's session continues through the school holidays). Quiet roads but busy pool.........  Too many  old men! and they tend to stand around at the end of the pool nattering - getting in the way.
Poor Polly cat had a worrying hour as the combine was on the field over the track. Front windows were wide open so it was LOUD. She looked extremely worried each time it came close. Plenty of dust flying about but it was too hot to shut the windows. There have been numerous field fires in Suffolk and Norfolk started just by the combine hitting a flint or dust getting into the engine they think. Kept my fingers crossed as there is no water in the wide ditch and no pressure in the water taps so a fire in the field would soon jump over to the track with nothing to stop it. Here comes the combine...................... 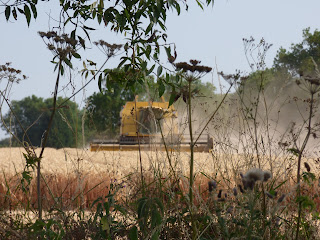 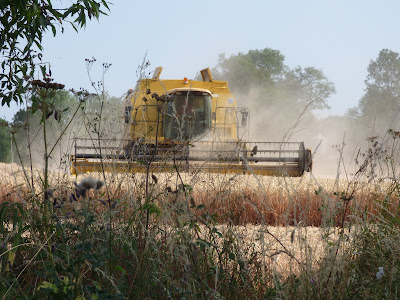 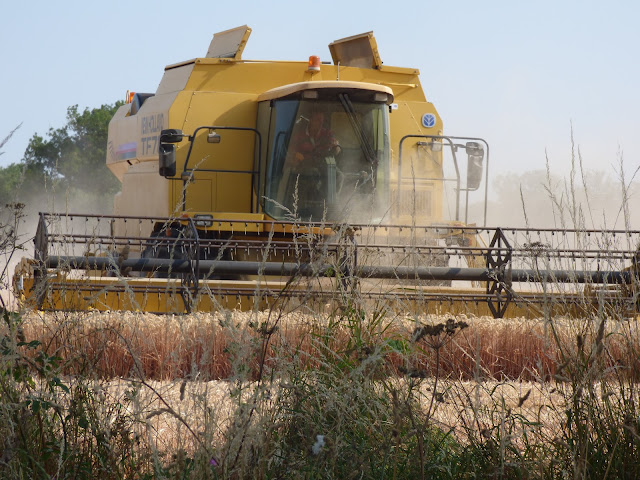 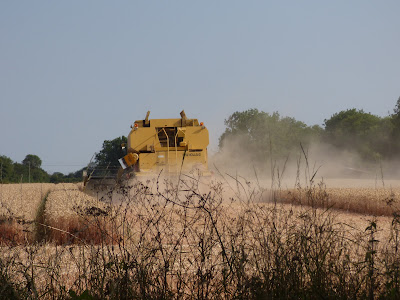 Nothing to be baled so it might be oil seed rape on here next year sown straight into the harrowed stubble..............soon probably..........they don't leave fields empty for long nowadays.......... although they might have to wait for rain.

Posted by Sue in Suffolk at 06:00
Email ThisBlogThis!Share to TwitterShare to FacebookShare to Pinterest
Labels: Car Boot Bargains, House and Home