Potatoes, Tomatoes, the Hedghog Returns and Replies to Comments

At the annual Potato Day in February I got 5 (enough for one row across a veg.bed) of each of First Early ...Home Guard and Swift, Second Early........Charlotte and Nadine and Maincrop.....King Edward and Majestic.

The two rows of  Early Potatoes were finished a few weeks ago. Awful quality........nibbled by ants and hardly any on each root.
Then  about 10 days ago I dug the first of the Second Early type Nadine and hooray at last, decent spuds. 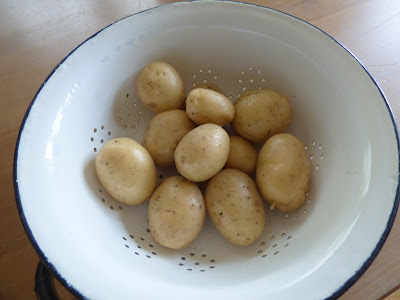 The same  day I had the first of the tomatoes from the greenhouse, they are meant to be small.........baby plum. 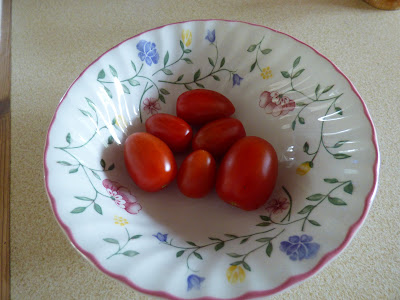 I've seen the hedgehog several times now, usually evening and always in the same place........because that's where I've been putting a bit of cat food! He/she loves it. and it gave me a chance for better photos.
I think it's now common knowledge that a dish of milk shouldn't be put out for them although in the past that was common. Maybe that's what led to a decrease in hedgehog numbers - killing by mistaken kindness. 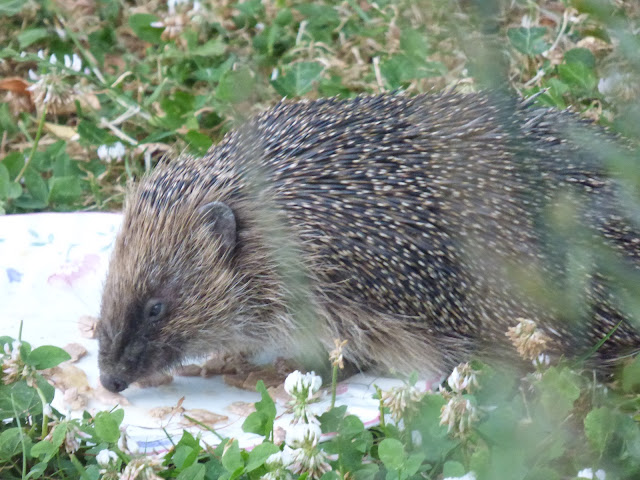 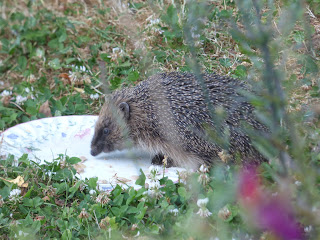 Thank you for all the comments and reminiscences about books, reading and libraries.

Hello to Samantha who hadn't commented before but was also a library assistant and has got through bereavement and cancer.

Eileen T asked if I remembered Library Tickets - yes I've spent years of library time getting them in order in trays. They were sorted by the date they were due back and then by a 5 figure number, so when a book was returned it meant flicking through the trays to find the bit that went back in the book and then the little pocket bit went back to the reader. When I started work borrowers were only allowed 3 books at a time, so people were in and out of the library much more frequently than nowadays - we can have 20 at a time from the mobile library!

Jean in Winnepeg (hope your arm is healing) reminded me of  Annuals, which we  had from Grandma at Christmas, and the Annuals were usually the same title as a weekly comic, which we always had. Then I've remembered that Grandma and Mum called  weekly magazines "books". So when we went to Stowmarket we would go into Durrants the newsagents and collect our "books" from a room at the back of the shop because they were ordered and kept for us.  So maybe I learned to read from "Jack and Jill" comic- the first one I had, then I remember  "Judy" and "Jackie" and "Fab 208" and they are all still available on ebay! and no I'm not tempted.

And thanks to Spade and Dagger I know that I'm not the only person who hasn't read all the children's classics. I  can only remember having Black Beauty which made me cry, The Water Babies which I didn't understand and Heidi which I  enjoyed.

Also thank you to Anon who suggested the Bookworm book a while back, I never remember where I've heard of books.

Back Tomorrow
Sue
Posted by Sue in Suffolk at 06:00
Email ThisBlogThis!Share to TwitterShare to FacebookShare to Pinterest
Labels: Natural world, Potatoes, Tomatoes