Up a Ladder and on a Chair in the Bathroom

Over a week ago I sanded down the bathroom walls ready for painting. It's only a small bathroom, one wall is almost all tiles, another wall has tiles, the bathroom door and the airing cupboard door, the third wall is part shower-wall and window so in theory there isn't too much to paint, but is darned awkward. Although one good thing, no doors, door frames, window or skirting board to paint - the doors are stained solid pine, window is plastic double glazed and the skirting and door frames are a sort of limed melamine type wood(?) which only need a wash down.

A day later was when my back went ping and that was the end of the decorating plans for last week.

So this week,  using a step ladder in the middle of the floor and a chair for other bits which is the only way to reach everything, I got started by filling a hairline crack in the ceiling and then got the paint out. (Dulux Bathroom colour Timeless- in case you are interested!)
To reach the deep sides and top of the window recess means climbing over the basin and loo and  sitting on the window sill. Managed that OK and did the fiddly bits behind the loo and basin.
That was enough for day one, I want to get it all done by the last weekend of the month so plenty of time and no point in overdoing it and aggravating my back.

Last year when I painted the living room you got a blow by blow account!  (I was quite chuffed to do a whole room myself as in the past Colin did most of  the decorating while I did the small bits and the fetching and carrying! ) but I don't need to do a day by day description because I got the rest done all in one day. I didn't really mean to but had it done all except one wall in a couple of hours so thought I might as well press on to a finish.

Here's the new walk in shower, all nice a tidy. I'm still marveling at the fact that there was exactly the right number of wall tiles spare in the garage to add two rows to what were there to bring it up to shower height! 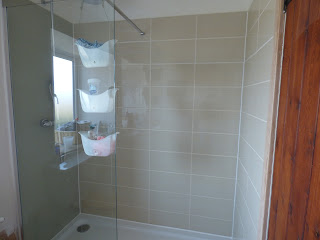 Replacing the huge, totally impractical Red bath which could never be filled as the water pressure is too low and impossible to climb out of too!

Picture from the sale brochure when we bought the house. 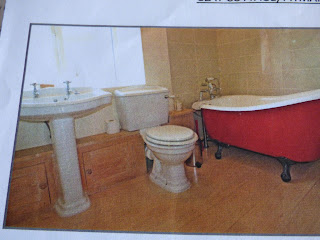 Clearing everything up and getting it all downstairs, cleaned and back into the garage took nearly as long.

Posted by Sue in Suffolk at 06:00
Email ThisBlogThis!Share to TwitterShare to FacebookShare to Pinterest
Labels: House and Home