It was at the after-the-funeral-get-together (because I refused to call it a wake.......it's not a word used much in Suffolk).

Towards the end of the afternoon, I was standing near some of the family and  a bloke came up to me and said "you don't know me do you?" I said  "No, but you must be someone who worked with Colin at sometime". "Yes, I'm C.M" he said. "Really!" I said with a big grin!

When Colin was a County Council road-man and then a supervisor in Central Area back in the early 1980's he was  based at the depot in Eye. C.M, also worked for the council as a road-man and he and his wife had rented the flat above the offices there and when Col told me who lived there I asked if this was the same C.M who went to the same secondary school as Col and was the same age as me and then I told Colin all about my first kiss! Colin must have told C.M that I remembered.

I introduced him to the family "here is the person who gave me my first kiss!" Certainly embarrassed the family!  Probably embarrassed CM too..........he said " I wasn't going to mention that if you had forgotten!"

Then we reminisced about that day almost exactly 50 years ago when I was a  13 year old helping on a stall at a one-off country fair event called "The Spirit of Suffolk" and he was there with Bacton Modern School to do a country dancing display......and not so shy!
It was quite surreal to meet again after 50 years! 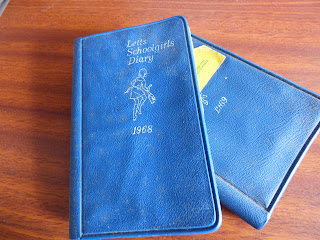 (You have to be a certain age to remember them)  and lost a lot of respect for my Mum when she told me off for kissing boys,............ she'd been reading my diary.
I must have vowed then that if I had children I would never read their diaries and I kept to that.

Posted by Sue in Suffolk at 06:00
Email ThisBlogThis!Share to TwitterShare to FacebookShare to Pinterest
Labels: Family, Memories