On my table this week are Cornflowers from the cut flower bed, Golden Feverfew,  Lavender in two different shades of  er.......Lavender, a variegated leafy shrub  that is probably an Euonymus and the leaves from a perennial in the garden that hasn't come into flower yet. It must have been there last year, but I don't remember what flowers it had so I'm not 100% sure.......maybe  Phlox? 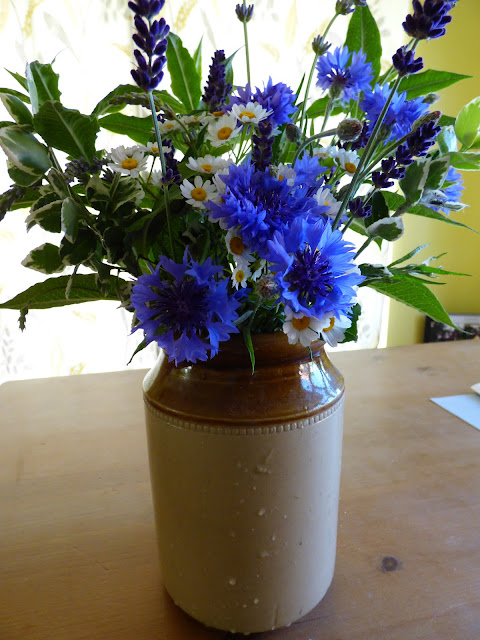 Cheering up the living room and making me smile.

There were lots of comments on Saturdays post and apologies for not replying. So here is a big thank you to everyone and answer to Athene - Yes Polly Cat can get "through" the chain fly curtain, there's a couple of inches at the bottom and she sort of puts her nose under and squeezes through. She doesn't really go through the chains and is very wary of the noise they make when I go through - she'll get used to it!
Thank you for the good wishes for Florence, she's now fine. They had 4 nights in hospital and got home Friday afternoon. She had antibiotics and steroids and an inhaler to sort out the chest infection or whatever it was and their local GP had already prescribed an inhaler for her last time she was wheezy. I hope this won't be a too frequent event but a little boy who was 2 years old and in the next bed to Florence has had many trips to hospital with the same symptoms since his first time. So Youngest may need to keep a bag packed! They've got the most wonderful playroom and outdoor play area at the hospital, so Florence was easy to amuse once she was well enough to trot around the ward, not so easy for Youngest daughter on the first day when Florence was confined to her cot on oxygen.
The plumber got the shower done, he was quite a good bloke really, just the company not good at telling me what was happening. Now I need to give the room a coat of paint (but not until Wimbledon is finished). I'll be contacting them again for the next phase which is taking the horrible old shower cubicle out of the bedroom and replacing it with a corner bath. Both the bathroom floor and the corner of the bedroom will need new flooring - vinyl type stuff, which will need sorting out before the bath is installed. Then my plan, after decorating the bedroom is to get an old fashioned four-fold screen to stand in front of the bath. In this way when I come to  sell the house sometime it will have more than just the one shower for a 4 bed house, and a bath behind a screen won't be such an eye-sore as the big shower enclosure.
I've got used to the ride on mower now. I often used one to cut the campsite at the smallholding way back, before we expanded it and Col got a mower for the back of the tractor, but that was just a big square field and the garden is a bit more fiddly to get round - only one near collision (with the cold-frame) so far!
How lovely to hear from Lynney in Illinois who will be up early to watch Wimbledon over the next two weeks, really good to share a  TV programme across the pond 😊

And finally - I had to find some positivity  or it would have been a Really Depressing Post!

PS Coming home from swimming yesterday with Radio 2 on and there was the doctor on the Jeremy Vine programme talking about the diseases that you can get from swimming pools! I turned it off PDQ

Posted by Sue in Suffolk at 06:00
Email ThisBlogThis!Share to TwitterShare to FacebookShare to Pinterest
Labels: Cut Flower Bed, House and Home