The First Week of July

Well.......... That's the first week of July done and dusted - dust being the word, as without rain for so many weeks everywhere is very, very dusty.
When I haven't been out and about I've had windows open and curtains closed in the living room, that means it stays cool for most of the day .

With June gone there ought be a post about the half-yearly accounts  -  and I've done no frugal month notes for a while either - but the financial thing has gone silly with all the costs of the funeral, the death grant/life insurance type thing from the County Council, the  grant and payments from the Department of Work and Pensions, the refund of council tax, then there was the costs of tax, insurance and MOT for the car and the big expensive dentist charges and not forgetting the plumbers' bath to shower work. I'll just say that one way and another, "Ins" to the bank were more than "Outs" - thank goodness, and there is no way I could be "Frugal In Suffolk" like the first title of the first blog. I feel so grateful that we inherited money and that Col worked for the County Council for so many years and loved his job. It means as long as I keep being careful I will be able to survive into old age without poverty and with all the years of practice I do know how to be careful.

Although I then promptly gave up carefulness for a moment and have spent out on a  day trip by train with Col's sister for later in the year And I had a spur of the moment takeaway! And bought two items of new clothes AT ONCE- unheard of............! and found a few bits for the Grandchildren from car boot sales.

Which reminds me...........the reason there haven't been any 'car-boot-bargain photo' posts for a couple of weeks is because, although I've been to a few, all I've spent is a couple of £s  on grandchildren stuff. There was a game to pop in the cupboard one week and a  tub of cutters and suchlike that are used with play-dough. Then last Sunday I got this.............. a doll's rocking cot complete with bedding plus a dolly feeding bottle and bib. There was a doll too but Florence has a doll she calls  'baby' at the moment so this new bigger doll will go in the cupboard for another grandchild or when Florence gets older. I paid £5 for the lot which seemed a good buy. 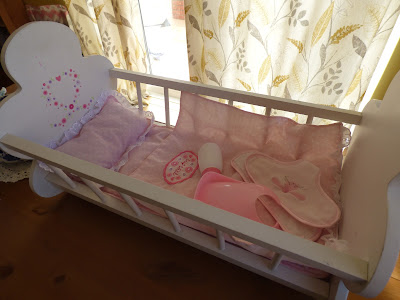 I gave the bedding a wash and took the cot over to Florence and she spent ages putting her 'baby' in, covering it up, rocking it violently and taking it out again! She was also pleased with another Shirley Hughes book that's been around since her mummy was little. "Alfie's Feet" has the lovely drawings and a story about shoes and boots and splashing in puddles - something all children like.
Jacob plus parents will be up to visit at the end of the month so better look out for things for him next, and it won't be long before I'll be finding bits and bobs for Willow....... Have to treat them all the same!

I got back to swimming, after the week off "with the plumber", and spent out more cash on a 20 swim discount card, so I've really committed myself to going now! it takes each swim down to £1.78 a time, good value I think. I'm now up to swimming 8 lengths (sounds good but only 160metres) non stop and then another 20 or so with some rests in between.
.
The first week of Wimbledon flew by, there have been several seeds knocked out and most of the Brits............ as usual. I've watched a lot on the BBC red button where they seem to have found the money to show more than just one other court which is what's been happening in the last few years. It's nice to be able to choose who to see. One match - a  men's doubles between 2 lesser known Brits(Clarke and Norrie) and two people from somewhere else, was on with no commentary and the fifth set went on and on and on. We are so used to commentators talking all through that it seemed quite strange and then all of a sudden there was a commentator which seemed even odder and then the match quickly finished after 5 hours of play.... 22 to 20 in the final set.....Brits lost, I think they call that commentators curse!

The only charity shop finds during this first week were two more Shirley Hughes books, one for Florence and one for the book basket at home and a Mary Wesley book for me.........Second Fiddle.In one charity shop I saw a little Wedgewood jug in an interesting design but it was £14.99......in a charity shop!

My plan for the weekend - once I've collected the electric sander from son and DIL  (spent ages looking for it before I remembered who had it!) I'll get started on preparing for repainting  the bathroom. Also hope to do another church from the book and visit a car-boot sale too.

Have a Good Weekend folks
Back Monday
Sue

Posted by Sue in Suffolk at 06:00
Email ThisBlogThis!Share to TwitterShare to FacebookShare to Pinterest
Labels: Car Boot Bargains, Family, My New Normal